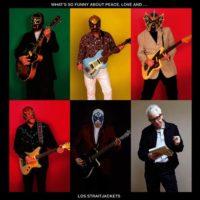 The album, as its title implies, is a guitar-packed, instrumental tribute to Nick Lowe—the prolific musician, songwriter and producer best known for a string of hits including “Cruel to Be Kind” and “So It Goes,” not to mention his work with Rockpile, Elvis Costello, Graham Parker and many others.

Today, we’re presenting the exclusive premiere of the album, which was produced by Neil Brockbank (Lowe’s producer and longtime collaborator)—and you can check it out below.

“Recording these songs reminded me what a great melodist Nick is,” says Los Straitjackets guitarist and co-founder Eddie Angel. “Everybody knows he writes great lyrics, but he doesn’t always get credit for his amazing melodies. The fact that the songs stand up as instrumentals is proof of that. And I think we managed to bring something new to the songs, which is what you hope to do when you’re covering other people’s material.”

The disc features 13 of Lowe’s most iconic songs, plus contributions by Lowe band member Geraint Watkins on keyboards, Royston Lowe on percussion and a vocal cameo by Nick Lowe on an undisclosed track.

TRACKLISTING:
Shake and Pop
All Men Are Liars
Lately I’ve Let Things Slide
You Inspire Me
Rollers Show
(What’s So Funny ‘Bout) Peace, Love and Understanding
I Read a Lot
Half a Boy and Half a Man
Checkout Time
I Live on a Battlefield
Raging Eyes
Cruel to Be Kind
Heart of the City