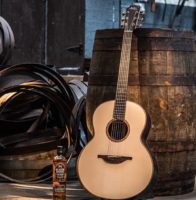 Lowden Guitars has unveiled its new Black Bush Edition acoustic. The guitar is the second collaborative effort between Lowden and Bushmills Irish Whiskey.

The guitar features copper from the copper pot stills used to distill Bushmills’ whiskey, in addition to barrel wood that was used to mature whiskey for centuries at the Old Bushmills Distillery in Bushmills, County Antrim, Northern Ireland.

The model’s back and sides are African blackwood, while the soundboard is alpine spruce. Oloroso sherry casks were used for the guitar’s back inlay and the 12th fret inlay. Only 25 of the guitars will be built.

The Black Bush Edition acoustic is available now for £9,800 (~$13,150). You can watch Northern Irish singer/songwriter Foy Vance, who also played a significant role in the guitar’s creation, put the instrument through its paces below.

For more info, head on over to lowdenguitars.com.