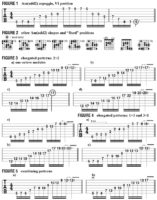 Last month, I offered a guitar adaptation of the theme from The Walking Dead, which is based on a repeating melody built from a minor add-9, or minor add-2, arpeggio.

As a follow-up, I’d like to now explore that cool, somber-sounding arpeggio in greater depth and show you a bunch of different places to play it all over the fretboard, using the theory-friendly key of A minor to demonstrate. Minor add-9 and minor add-2 are essentially the same thing, the only difference being the octave in which the added note is played.

If it falls above the fifth in a chord or arpeggio voicing, as in the “Walking Dead” melody, it’s reckoned as the ninth. If it’s below the fifth and sandwiched between the root and third, then it makes more sense to think of it as the second, in terms of a scale degree or interval. In either case, the arpeggio, which we’ll refer to today as minor add-2, is a four-note entity, spelled 1 2 f3 5, with “flat three” signifying the minor third in music theory street lingo.

In A minor, these four notes are A, B, C and E, and they may be “stacked” in octaves, as we shall see. The examples that follow include some fairly wide fret-hand stretches that require flexibility and limberness, so start out slowly, warm up your fingers and ease into forming the shapes. With practice, they’ll become easier to play.

FIGURE 1 shows an Am(add2) arpeggio played in sixth position across all six strings, spanning two octaves. What we have here is a basic A minor arpeggio—A C E—with the second, B, added in each octave. Fret any notes that fall at the seventh fret with your ring finger, and use your pinkie to reach up to the ninth fret.

Notice that we’re skipping over the B string, which I’m purposefully doing in order to avoid barring the top three strings. Barring is something you’ll want to avoid whenever possible when playing melodic arpeggios, as it makes it more difficult to keep the individual notes separated, so that they don’t ring together like a chord.

FIGURE 2 illustrates a half dozen other positions and two-octave shapes for this same Am(add2) arpeggio, with those above the 12th fret additionally transposed down one octave and 12 frets. Notice in the diagrams that I’ve circled the A root note in each octave to help you identify it. A great way to expand the range of any arpeggio further is to play it diagonally across the neck, using position shifts, as demonstrated in FIGURES 3a–d.

These elongated patterns have you playing two notes per string and four-note sequences, or “modules,” that repeat in successive octaves on different pairs of adjacent strings, starting with the lower octave on the bottom two strings, followed by the middle octave on the D and G strings, then the higher octave on the B and high E.

In many real-world soloing scenarios, you may only want to employ a short, one-octave fragment of a larger pattern, which you can then loop into a repeating shred lick.