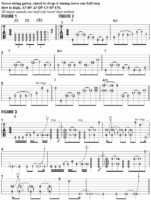 Throughout the course of these columns, my focus has been primarily on the six-string guitar parts I’ve crafted that are featured in the music of both Periphery and my side project, Haunted Shores.

This month, I’d like to delve into the use of seven-string guitar in the music of Periphery, by detailing a few of the signature riffs in the song “Flatline,” from Periphery III: Select Difficulty. The tuning I use for this song is what’s commonly referred to as a “drop A seven-string,” for which the seventh string, normally tuned to B, is lowered a whole step, to A.

But I then additionally tune all seven strings tuned down one half step, resulting in the following tuning, low to high: Ab Eb Ab Db Gb Bb Eb. When tuned to drop-D tuning on a six-string guitar, the sixth and fourth strings are both tuned to a D note, one octave apart, which enables one to play fat-sounding, three-string power chords by simply barring a single finger across the bottom three strings at any given fret.

Likewise, when tuned to drop-A on seven-string guitar, the lowest string and the string two strings higher (the fifth string) are both tuned to an A note, one octave apart, allowing power chords to be played by simply barring across the bottom three strings at any given fret, as illustrated in FIGURE 1. While doing this, one can additionally fret the fourth string two frets higher, which octave-doubles the note sounded on the sixth string.

FIGURE 2 illustrates the part I play during the first pre-chorus in “Flatline,” which, like so many Periphery riffs, incorporates lots of quick position shifts that are performed with a combination of slides, pull-offs and hammer-ons. This eight-bar passage outlines the alternation of two chords, F and Am, from bar to bar. The series of slides can be quite tricky to execute with accuracy when playing the part at tempo, so I suggest working through it slowly at first, one bar at a time, before approaching the tempo of the recording.

Precision and accuracy in the slides is essential to performing this riff properly. Bar 3 begins just as bar 1 had, but then we veer off into new territory in the second half of bar 3. The first four-bar phrase ends with a shape that slides way up to 17th position; this figure is repeated in many other sections of the tune and functions as a revisited “melodic theme.”

Bar 1 is then repeated as bar 5, and even though bar 6 begins as bar 2 had, I once again move into different melodic territory in the second half of the bar. As bar 7 moves into bar 8, the A note on the G string is sustained along with the high G note sounded on the first string, and this A-G doublestop is pulled back to a G and high E double stop in the next bar.

FIGURE 3 presents an alternate version of, and variation on, the pre-chorus riff, which I think of as the heavy, dissonant pre-chorus figure reprised later in the tune. I begin with fast 16th-note alternate picking on the open seventh string and then immediately move into phrases that emphasize the upbeats, which lend the part a jagged, unsettling feeling.

At the end of bar 1, be sure to hit the bottom four open strings with force—this is the djent chord from which the style derives its name. These rhythms can be confusing, so once again work through each bar slowly and carefully before playing it up to tempo.