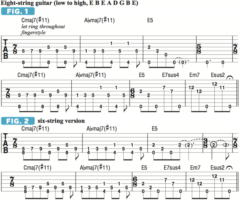 A signature element in the songwriting techniques I use with my band Animals as Leaders is the incorporation of unusual time signatures, also known as odd meters. In the quest for fresh-sounding new music, we will often superimpose different meters and/or syncopations on top of one another, a technique explored to great extent by many of today’s progressive rock and metal bands, such as Periphery, Dillinger Escape Plan and, of course, Meshuggah.

A good example is the song, “Cylindrical Sea,” from our new album, Weightless. As many of you know, I’m a huge Allan Holdsworth fan, and the sound and approach I use on this song are influenced by him.

For all of my columns up to this point, I have arranged my eight-string guitar work for seven-string guitar, as few of you have eight-string instruments. When possible, I have also arranged the parts for the universally accepted six-string. In covering “Cylindrical Sea” in this column, however, I have written the parts for both eight-and six-string guitar, as the use of the low eighth string, tuned to an E note an octave below the sixth string, is essential to performing these parts correctly.

Illustrated in FIGURE 1, the intro consists of a melodic line played on the fifth and fourth strings, supplemented by low root notes on the eighth string. I play this part fingerstyle, using my thumb to sound the lowest notes and my index, middle and ring fingers for the melodic content played on the higher strings. Throughout this section, all notes are allowed to ring as long as possible. Be sure to keep the fingers of both hands properly arched so that clarity is maintained as you move from one chord voicing to the next.

The intro continues with the riff shown in FIGURE 3, again arranged for six-string gui- tar. This section begins the same as FIGURE 1, but then moves back to the tonic, Em, followed by different resolutions from Cmaj7#11, first by E/G# and then E major.

The last figure in this column utilizes a technique similar to standard classical guitar “tremolo” technique, wherein a single note is picked repeatedly and rapidly with different pick-hand fingers. As shown in FIGURE 4, the B note on the fourth string’s ninth fret is picked repeatedly while the bass note under it continually changes. This is demonstrated on the eight-string but most if it is playable on a seven-string.