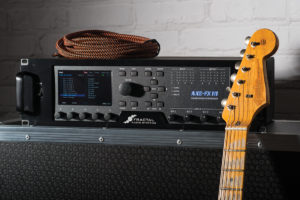 The high-end digital modelling phenomenon returns with a third iteration that promises significant upgrades both inside and out. Darran Charles plugs in…
The Fractal’s rackmount form factor returns, making it suitable for both the road and the studio

There’s much greater competition in the high end amp modeller market since Fractal Audio first arrived on the scene 10 years ago, but the Axe-Fx III cements its place as the market leader simply because of the sheer flexibility on offer. This is a serious – and mobile – piece of studio or live equipment capable of providing the tones for any musical project.
The vast range of tweakable parameters that Fractal offers sometimes comes in for criticism when compared to the simplicity of other units, and perhaps there is an element of justification there. However, these functions are there if you need them: most of us would be happy using the traditional EQ sculpting controls and not much else, because the presets offer such well-voiced starting points for your tone.
The Axe-Fx III also represents an entire live rig. More and more guitarists today are running a modeller straight into the desk and this method takes a lot of uncertainty out of live shows because, quite simply, the sound you programmed at home or at rehearsal will be identical to the tone coming through the PA (as this reviewer can attest).
While an upgrade from the Axe-Fx II might not seem immediately necessary, the inclusion of over 2,000 new cabs is a difficult prospect to resist. Add to that the improved effects blocks, the unrivalled processing power, and the rate at which Fractal develops and distributes new firmware, it’s almost certain that within six months, the Axe-Fx III will leave its predecessor – and many of its competitors – trailing in its wake.
KEY FEATURESFractal Audio Systems Axe-Fx III
• PRICE €2,899
• CONTROLS 800×480 colour display; 5 endless rotary push-encoders; home, edit, store, tempo, enter, page left, page right; 4 arrow buttons; 8 LED meters; 3 status LEDs; value rotary; 4 output level knobs
• INPUTS/OUTPUTS Front panel: 1/4” input jack; 1/4“ stereo headphone jack. Rear panel: 1/4” jack (unbalanced) instrument input; 2 XLR/1/4” combo jacks (balanced) inputs; 2 pairs L&R 1/4” jacks (balanced) inputs; output 1: L+R (stereo) XLR-Male (balanced), and L&R 1/4” jacks (Humbuster) outputs; Output 2: L+R (Stereo) XLR-Male (balanced); Output 3: L+R (Stereo) 1/4” jacks (Humbuster); Output 4: L+R (Stereo) 1/4” Jacks (Humbuster); S/PDIF input & output; AES/EBU input and output; 2 No. Expression pedal inputs 1/4” jack; FASLINK II Connector; USB; AC Power; MIDI in, out, thru; Ground lift
• DIMENSIONS 482.6 x 131.1 x 292.9mm
• WEIGHT 15.24lbs/6.87kg
• CONTACT G66 +49 461 182 8066, www.g66.euThe post Fractal Audio systems Axe-Fx III appeared first on The Guitar Magazine.