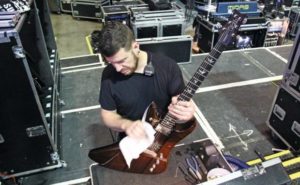 “Up to that point, it was the biggest headlining show we’d ever done,” Mark Tremonti says about Alter Bridge’s performance at London’s O2 Arena on November 24, 2016.

That gig, which the guitarist estimates to have taken place in front of roughly 15,000 fans, can now be heard in full on the recently released Live at the O2 Arena + Rarities.

The three-CD package features the evening’s set list spread across two discs, as well as a third disc of rare cuts that includes two previously unreleased tracks—“Solace” and “Cruel Sun”—from the sessions for Alter Bridge’s 2004 debut, One Day Remains. “I’ve always loved those two songs,” Tremonti says, “and I’ve been saying for years we should put them out. It just never came to fruition until now.”

But while the Rarities disc unearths some interesting deep cuts, the meat of the new release is the spectacular live set, which encompasses everything from defining Alter Bridge hits like “Open Your Eyes” and “Isolation,” to fan favorites like “Metalingus” and “Blackbird,” to recent tracks like “Show Me a Leader” and “The Writing on the Wall.” As for why the band decided to release the entire show on CD? “We always want to capture those key moments, when we hit those new benchmarks,” Tremonti says.

But, he also admits, playing those benchmark shows can be stressful.

“We were hyper-focused, because we knew we were recording and that it was going to live on for a lifetime and become part of our legacy,” he says. “So you want to make sure you don’t play too stiff, you know? You want to have a good time.” Tremonti laughs. “Then again, you don’t want to play too loose and have too good of a time, either.”

Below, Tremonti walks Guitar World through 12 snapshots from his band’s momentous day at the O2.

1. “This is one of my favorite sounding and playing guitars. Paul Reed Smith and I designed it on his dry-erase board. There’s two of them—this brown one, and then there’s also a black one. The black one was the actual one-piece mahogany guitar that was kind of the guinea pig, and this was the more perfected version. I think it’s too radical a shape for some of the traditional guys there to wrap their heads around, but maybe one day PRS will put it out. It’s funny, all the younger guys in the factory love the guitar, but then all the guys who are kinda like the business people are on the fence about it. But it’s killer. That’s Frosty, my guitar tech, holding it.”

2. “This is Myles’ [singer Myles Kennedy] pedalboard. He really loves that MXR [GT-OD] pedal for overdrive. He always uses that. And he’s used those Line 6 pedals for years and years for all his delays and effects. He’s totally the effects guy in the band. I’m the meat-and-potatoes tone guy. If you hear crazy delays or flangers or choruses or octaves or whatnot, that’s usually him. As you can see in the later photo, my board is much more simple. I don’t have a switching system or anything.”

3. “The big triangle picks you see here are Brian’s [bassist Brian Marshall]. The little ones with the signature on them are Myles’. And then the yellow and red ones are the picks Myles actually uses. None of these are mine!”

4. “Soundcheck on the day of the show. We’re just talking things through. You can kind of see the seriousness on our faces. [laughs] We know the weight of the show. We usually play ‘Cry of Achilles’ first, because it has clean tones, dirty tones and lead tones, so it’s a good one to do in order to check the sound. And then we’ll just work out the set list for that night and take songs that aren’t as common and rehearse them. After that, we’ll usually let in all the meet-and-greet folks for the soundcheck party, and then we’ll play some other songs that we need to rehearse for the night.”

5. “My guitars. The C# tuning is probably the most common tuning. Everything is mostly half-steps down to begin with, and then we have about four songs that are maybe down a whole step. And then open D5 shows itself two or three times during the night as well. To make things easier live, we just take all the open-D5 stuff and put it down a half step. Then we have the oddball tunings, like a drop-C tuning. Each guitar in each tuning also needs to have a backup guitar in that tuning. So I have about eight or nine guitars out on the road with me.”

6. “The most important pedal to me is the wah [the Morley Mark Tremonti Wah]. Ever since I was a kid it’s just something I’ve loved. And it has a built-in overdrive as well. My signal chain goes right through the pedals—there’s no switching system. I don’t want it to get too complicated. So the wah goes right into the hand-wired [Ibanez] Tube Screamer, which is my favorite overdrive, then the Dunlop Uni-Vibe and then the T-Rex Octavius. But the wah is my main thing. I could get away with doing the whole show with just that one pedal.”

7. “A shot of the crowd that night. The general-admission area is where all the action’s at. It’s just intense when you look out at it. Especially when those house lights kick on and you see everybody. A lot of times you’re standing up there and the light’s in your eyes and you get put in your own little world. But when those lights turn on it’s always amazing.”

8. “That’s the crew day sheet. My day sheet, I do a guitar clinic every day and then I do a meet and greet. I usually go from about two o’clock in the afternoon until maybe 6:30. Then we have a couple hours to have dinner and whatnot. And then show time is around nine. This one also says ‘Happy Thanksgiving.’ Sometimes it sucks when you’re not in the States for some of these holidays. It’s just weird. There’s no Thanksgiving in England, you know?”

9. “The set list for the night, with the tunings that correspond to each song. Usually I try to have it so I don’t have to switch guitars every song. But this particular set list, it looks like I’m switching almost every single song. That was tough on Frosty! And the guitar laying there is the same one from the first photo.”

10. “The guitar in this photo is my favorite PRS of all time, which is my charcoal burst. This was, I think, the third or fourth guitar PRS built for me, and it just feels right. And below the bridge, that’s a sticker of Dimebag. We were doing a show in Orlando, and it was right after his passing. And a fan was going through the line and just handing out these memorial stickers. I got my hands on one and just put it on my favorite guitar. You can see how faded the sticker is now. It’s been on there for a lot of years. And a lot of people see it. I’ll be playing a show and people will point at it and give me the horns and show their appreciation.”

11. “That’s Mr. Ian Keith. He’s Myles’ guitar tech. He’s probably the longest-standing Alter Bridge crew member right now. He’s been with us for a lot of years. He’s excellent at what he does.”

12. “After the show. The crews are taking down the P.A.s and cleaning up the mess that the folks have made. But it looks pretty clean already. You know, folks in England, they clean up after themselves! As for the band, on a night like this there’s probably a lot of talking with guests afterward, having a few drinks and relaxing. Because leading up to the show there was a lot of stress and a lot of focus. And then you can kind of let loose afterward, and see your friends and family. Then you get to bed around three in the morning and you do it all again.”

Steve Vai on his time in Whitesnake: "There was real aggression and control in my playing. I just remember thinking it was never good...

Never lose your Allen key again with the HexHider, a magnetic tool that attaches to your guitar’s headstock

Guitar arpeggios: 8 things you need to know about this pivotal soloing technique