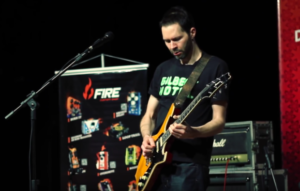 Paul Gilbert: Fast Picking "Is Not That Useful"

Paul Gilbert recently sat down with Total Guitar to discuss everything from his new album to the saxophone. One particularly eye-catching part of the interview though, was when Gilbert discussed his experiences as a guitar teacher, and how teaching has led him to reevaluate his approach to the instrument.

Gilbert talked at length about how he has soured on the idea of speed being an indicator of good playing.

“Teaching is helpful because I get to see the inherent problems of the instrument,” he said. “It’s made me appreciate things that I’m able to do and not care so much about some of the things that have made me popular.”

“The fast picking thing is not that useful, but holding a bend, adding vibrato and being in tune is,” he continued. “Teaching has made me realize that a lot of my fast playing is the musical equivalent of, ‘Umm… umm… uhh…’ – it’s like when you’re trying to think of the next thing to say that actually has meaning, you fill space.”

“‘Umm’ has about the same meaning as my fast playing.”

Drive-By Truckers: "These songs called for lyrical playing and slide guitar was a great way to achieve that"