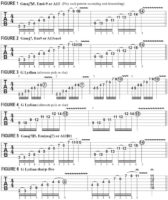 Another Useful, Lower Repurposing of the Sus4b9 Arpeggio, Plus an Exotic Wide-Interval Variation

Continuing our exploration of musically intriguing ways to repurpose the four-note sus4b9 arpeggio we looked at in the November and December 2017 issues, I’d now like to show you yet another cool way to apply it and also introduce an exotically interesting and enigmatic-sounding variation that entails the challenging use of a wider interval and fret-hand stretch.

To review, in the previous two lessons, I presented a pair of diagonal fretboard paths for an Asus4b9 arpeggio, spelled A Bb D E, or 1 b2 4 5, both based on the same four-note shape that’s initially played across two adjacent strings, two notes per string, then repeats in higher octaves on higher strings.

We then took both paths, one beginning on the low E string’s fifth fret and the other on the 12th fret of the A string, and transposed all the notes down a half step and one fret, using the same shapes.

Played over the same A bass note, this harmonic reassignment of the notes transformed our four-note arpeggio to Amaj7b5, starting on the seventh: G# A C# Eb, or 7 1 3 b5.

We then looked at a variation in which we “un-flatted” the fifth, Eb, raising it to the perfect fifth, E natural, which gave us the more common and conventional-sounding Amaj7 arpeggio, again starting on the seventh—G# A C# E, or 7 1 3 5. Finally, we changed our accompanying bass note to the relative minor tonal center of F# (minor), which instantly yielded two additional and very cool arpeggio sounds to play with—F#m6-9 and F#m9.

Continuing along these lines, FIGURE 1 shows last month’s two different Amaj7b5 arpeggio paths transposed down a whole step and two frets to Gmaj7b5, in each case starting on the seventh—F# G B Db(C#). As indicated, these patterns can also melodically describe an Em6-9 sound—2 b3 5 6 (or 9 b3 5 6)—and, when played over an A bass note, A13. In this latter context, F# becomes the sixth, or 13th, G is heard as the minor, or “flatted,” seventh, B as the second/ninth and C# as the major third.

FIGURE 2 shows the same transposition and harmonic reassignments applied to last month’s Amaj7 arpeggios (with the pinkie brought into play), again shifted down to Gmaj7. In this case, changing the bass note to E gives us Em9, starting on the second, or ninth, F#, and changing it to A creates a fusion-y A13sus4 sound, with D now being heard as the perfect fourth.

As FIGURES 3 and 4 demonstrate, including both Db(C#) and D in any octave within any of these patterns gives us additional useful phrasing and technique options, in terms of the number of notes we have to either pick or slur on a given string—three notes instead of two.

Taking our Gmaj7 (or Em9 or A13sus4) arpeggio shapes and raising the D note to D#, one fret higher and fretted with the pinkie, produces the enigmatic-sounding variation I spoke of earlier, the exotically interesting Gmaj7#5 arpeggios illustrated in FIGURE 5, which may alternatively be heard as Em(maj7) or A13#11(no3).

Play all of these patterns both ascending and descending, and be sure to check out the video for more in-depth demonstrations and applications of them.