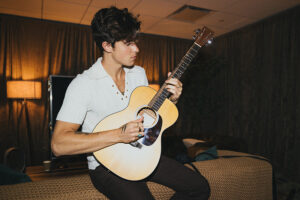 Inspired by Shawn’s go-to vintage Martin and featuring classic Shawn imagery, every detail of this guitar was designed and created in collaboration with Mendes for his official signature model. The new guitar not only sounds amazing, but is incredibly comfortable, and best of all, it’s environmentally friendly. This edition is crafted with 100% Forest Stewardship Council (FSC®) certified tonewoods in a 000 Junior-sized, 14-fret instrument and comes with a gig bag made from recycled ocean plastic that meets the Global Recycled Standard. The Shawn Mendes Signature Edition marks the largest production run of 100% FSC-certified guitars Martin has ever completed, and it is the first time a Martin guitar has been paired with a gig bag made from recycled ocean plastic. And the retail price of $799 is approachable for avid collectors and first-timers alike.

“Creating this guitar alongside Martin has been a dream of mine. The signature we created together is not only something I’m proud of musically, but also because it aligns with my passion for sustainability, and supports the Shawn Foundation’s initiatives. I can’t wait to share a guitar I love with fans across the world.”  – Shawn Mendes

A Shawn Mendes signature guitar wouldn’t be complete without some personal design details that all of Shawn’s fans will appreciate. Laser etched on each wing of the bridge is a swallow inspired by the tattoo on Shawn’s right hand. Additionally, each instrument comes with a special label featuring the Shawn Mendes Foundation sunburst logo. And to finish it off, Shawn’s signature is inlaid at the top of the fretboard.

The Jr. size and 000-body depth make this guitar extremely comfortable for any player. It’s great for strumming on the couch, on the beach, or around a campfire. And with Fishman® Sonitone electronics included, it also sounds great on stage. This is a guitar you will never outgrow.

To add a little more fun to the project, a sample of Shawn’s lyrics is hidden somewhere inside the guitar. You might find one laser-etched on a brace, or under the bridge, or even under the rosette. Some of the phrases include: “We lay under the same stars,” or “You’ll never be alone.”

As part of the partnership, Martin Guitars will be supporting Mendes’ goal of making music accessible to everyone. Martin will be making a contribution to the Wonder of Music Program at The Hospital for Sick Children (SickKids) presented by The Shawn Mendes Foundation. SickKids, affiliated with the University of Toronto, is Canada’s most research-intensive hospital and the largest center dedicated to improving children’s health in Mendes’ home state. The Wonder of Music Program Presented by Mendes aims to fund music therapy activities that are accessible to young patients at the Toronto hospital, with activities including songwriting, first exposure to music, heartbeat songs for families of patients, and lullabies.

Shawn has over 62 billion global streams and 10 billion video views. He topped Billboard’s “21 Under 21” in 2017 and 2018 and has been featured on Forbes “30 Under 30,” Spotify’s “25 Under 25,” and Time Magazine’s “Time 100 Most Influential”. In 2018, ROI Influencer Media recognized Shawn as the #1 Most Influential Artist and #1 Most Influential Teen across all social media platforms.

In 2019 Shawn launched The Shawn Mendes Foundation, which seeks to inspire Shawn’s audience, the youth generation of today—to learn more about the causes they’re passionate about, and empower them to use their voice, take action and give back to bring change to the world. As part of its ongoing mission, the Foundation provides resources and support to amplify the voices, messages, and platforms of young leaders driving positive change.

About Martin Guitars and Strings:

F. Martin & Co.® has been Inspiring Musicians Worldwide® for nearly two centuries with their superior guitar and string products. Martin guitars and strings remain the choice for musicians around the world for their unrivaled quality, craftsmanship, and tone. Throughout the company’s long history, Martin products can be seen and heard across all genres of music and in all segments of pop culture, from concert and theater stages to television and movies.

With an unwavering commitment to environmental sustainability and responsible manufacturing practices, Martin continually drives the acoustic guitar market forward, introducing innovative features that have become standards across the industry. These groundbreaking innovations include the introduction of X-bracing, the 14-fret guitar, and the “Dreadnought” size guitar.