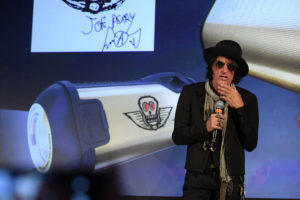 One would be hard pressed to find a better authority on the sound of rock music than legendary Aerosmith guitarist and co-leader Joe Perry. Reigning at the helm of this iconic band since its inception in 1971, Joe Perry has set the bar for pure, unadulterated hard rock guitar via songs like “Walk This Way,” “Sweet Emotion,” “Dream On” and “Back in the Saddle,” and masterpiece albums like Get Your Wings, Toys in the Attic, Rocks, Draw the Line, Permanent Vacation and Pump.

Perry has recently teamed up with Monster Products for the design and release of the Monster Blaster Classic Rock Edition and the Monster Firecracker Classic Rock Edition, two updated, rocked-out versions of Monster’s original, critically acclaimed boom box. Both blasters are specially tuned by Joe for the optimal reproduction of classic rock and will feature a “royal rock” gold finish and handcrafted nameplates when they are released in the first quarter 2018. Additionally, the first 200 Monster Rocker Blasters will be hand signed by Joe himself.

“I’ve had a great relationship with Noel [Lee, founder of Monster Products] for a very long time,” says Perry. “We could tell from the start his guitar cables were definitely a notch above everything else out there, in terms of sound and durability. Over the years, Monster have always been the ‘go-to’ guys for us.”

“Over time, they branched out into home audio and car audio products, and I could see just how great all of these other products were and how great they sounded. They have giant speaker cables for home audio systems that probably have a quarter pound of copper in them. The breadth and scope of their products, from battery chargers on up, is impressive, so it was a natural progression for them to get into headphones and boom boxes. I was glad to work with them on these new boom boxes.”

“We all saw the Beats headphones take off, and Monster’s Element Bluetooth headphones are a perfect compliment to that market,” Joe continues. “The Beats are great for rap and have all of that low-end you need for that music, but, to my ears, they weren’t perfectly suited to rock music. Noel said, ‘We gotta get back to the roots and make a product designed for the sound of classic rock.’ I worked with Monster on the Element headphones, specifically with the faithful reproduction of classic rock music in mind. And they did a great job—they sound fantastic.”

Monster has had their Monster Blaster boom box on the market for a while, and it does an incredible job at reproducing the low end while not sacrificing the clarity of the mid-range, which is where so many of the frequencies of classic rock reside. “For the last year, I’ve had a prototype of the new signature boom box, and I’ve taken it with me around the world. I love it. With the new model, we’ve added a few tweaks to the sound, assuring that the bass sounds big but flat, so it won’t over saturate the other frequencies, and the mids will be a little more present. With all of the music we love—Jimi Hendrix, Led Zeppelin—it’s about the sound of the guitar and the vocals, which is all up there in the mid-range. That stuff has gotten buried on a lot of ‘modern’ systems, because too much bass will cloud it up. We’ve tightened up the overall sound of the bass, and also added a ‘bass boost’ too. For example, if you listen to rock music that is pre-1966, like some of the old Byrds stuff, the bass is pretty light on those records. The ‘bass boost’ will add more depth to the sound and make it sound richer and wider.”

How much collaboration took place between Joe and Monster in designing his signature boom boxes? “We spent a lot of time getting it right,” says Perry. “We sat in a room with their principle engineers and tuned the box by listening to all different kinds of music, and some very specific records, through it, getting it to sound just right. We listened to everything from early Elvis Presley records to dance stuff from the last couple of years, and the latest electronic music of today. Technically, these boxes will reproduce whatever you put into them.”

Like the standard Blaster, both of the new boxes have features like special Indoor and EQ Modes, a rechargeable battery for up to 12 hours of continuous listening, bi-directional driver design with full-range drivers in angled 360-degree orientation, a down-firing integrated powered subwoofer, and it’s completely waterproof and splash-proof. “This box is perfect for the road,” says Perry. “It’s been everywhere with me. There are no knobs on it to break, it’s Bluetooth-compatible, and it’s virtually indestructible.”

Having spent the greater part of his lifetime working in recording studios with Aerosmith and his solo projects, Joe is accustomed to the pursuit of the purest and most accurate reproduction of sound of his signature guitar tone as well as the overall sound of the band. “There are people who spend hundreds of thousands of dollars on home sound systems, and that’s great if that’s what you are after and you can afford it. My goal in working with Monster on this box was to make something that sounds incredible but is also affordable. When you compare the cost of these boxes to comparable devices, it’s much more in line with what most people can afford. This box offers a lot of sound reproduction for the money.”

Another consideration is the changing trends in musical tastes. “The sound of classic rock is only expanding,” says Perry. “There are so many new bands that are going after the classic rock sound of the Sixties and Seventies, and people are listening to the old records more than ever. I wanted both the latest records and the old classics to sound as full and rich as possible. Kids are also discovering the sound of vinyl, and there’s been a huge resurgence in the popularity of the vinyl format.

“Monster said, let’s push a reset button here and get back to the sound that we have all loved for so many years. ‘Classic rock’ can be different things to different people. Is it ‘All Right Now’ by Free, or is it ‘Stairway to Heaven’? Those are top-of-the-charts songs that get a lot of plays, but there is a lot of great music that I think of as ‘classic rock’ that is very different from that. I’m a guitar player, so the stuff I gravitated to was all of the stuff that we were jamming to, like Jimi, Jeff Beck and Cream. I feel this box recreates the sound of the recordings in line with the way the artists wanted it to sound. When you listen to Exile on Main St, you want to hear some bottom but not at the expense of the guitars. If you have a $10,000 stereo, you will get that, but you can get that kind of clarity with this box, too.

“Another important thing is that the boxes are true stereo; when you listen to Jimi Hendrix’s guitar solos, you clearly hear the extreme panning effects that are there on the record. Whether listening with the Blaster boom box, the Element headphones or the high-performance ear buds, the kind of music I love sounds great. If I don’t love something, I won’t put my name on it, and I’m happy to have my name on this product.”

Look for the two new Joe Perry signature boom boxes in the next few weeks, and in the meantime, give a listen to Perry’s latest solo album, Sweetzerland Manifesto.