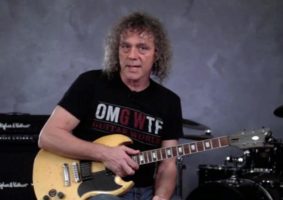 As promised last month, I now present an original melodic solo, played over a minor jazz-blues progression in the key of E minor (see FIGURE 1).

It’s two choruses long (24 bars total), is played over a medium-fast swing-eighths groove and demonstrates what I think are some pretty cool, musically effective things to play over this rather dark, intriguing set of chord changes.

For reference, I’ve included chord names above the notes, as well as the voicings and fingerings I used for the accompanying rhythm guitar part heard in the online video demo. The tempo is 200 beats per minute, which is fairly brisk and lively and not too laid back…ideal for playing swing eighth notes. It’s also slow enough that I can manage to shred a little on some alternate-picked eighth-note triplets, (see bars 12 and 14–16).

Near the end of the second triplet burst, on the downbeat of bar 16, I land on the fourth of E7#9, A, then approach the third, G#, from a half step below (G), so I’m hitting that golden chord tone a beat late. This run is a prime example of how one’s technical abilities and inabilities, or limitations, often steer and determine note choice when attempting to play quickly.

In this instance, I gravitated toward these particular notes because they offered an easy “opening,” or “path,” for alternate picking fast eighth-note triplets, which can be very challenging and difficult, depending on how the pick strokes fall when crossing strings. (Ah, the bane of an alternate picker’s existence!) Sometimes, when shredding, the desired rhythmic effect—in this case, “machine-gun” triplets—and melodic contour trump a “perfect” note choice.

Notice also in bar 16 how I rev up my picking motor across beats two and three by repeating the same three notes on the A string before crossing to the D string and continuing the ascent. This Steve Morse–inspired alternate picking move is effective for mustering energy and building momentum in a climbing triplet run.

Another noteworthy tactic employed throughout the solo is the use, over Em9, of the major seven, D#, which I often use to “tonicize” the temporary E minor tonal center in a classical kind of way. The D# note harmonically clashes with the chord’s native minor seventh, D natural, which lives within the E Dorian mode (E F# G A B C# D), but it can melodically work well in context.

Steve Howe: "You can’t search for your own sound. You’ve already got it – it’s there"

This mind-boggling acoustic has an onboard Raspberry Pi computer, effects and speakers