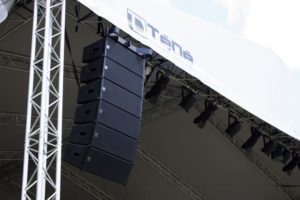 The order, which included iKON iK42 amplifiers, was placed with the manufacturer’s territorial distributor, BG Event Kft.
The new PA debuted at the two-day Bősi Motoros Találkozó (Bősi Motorcycle Meeting), with 10 bands appearing in front of 2,000 people where it proved very popular.

According to Balázs Szentiványi, purchasing manager at BG Event Kft., the idea of upgrading the rental company’s inventory came about as soon as Martin Audio announced the Wavefront Precision family.

“TéDé already owned a W8LM Mini system and since they are on a healthy growth path they were in need of a larger PA,” he said.

Tamás Dávid recalls when he and members of his technical team accompanied Szentiványi to Martin Audio’s open day last September. “I heard the WPC system there for the first time and decided immediately to change my old system to this new series,” he said.

He was no stranger to the Martin Audio signature sound, having purchased a W8VDQ and WS218X subwoofers back in 2011 which, with the addition of the W8LM, had given him a festival system. He also has MA12K amplifiers presently driving his subwoofers, which will eventually be upgraded to iK42’s.

Dávid is also aware of the enormous profile Martin Audio has built at major Hungarian festivals such as Sziget, which has made it an in-demand brand for promoters. “Many technicians now view Martin Audio as the best example of quality,” he says.

As such, he is confident in the Martin Audio WPC system. “It delivers enormous sound pressure level for the money, and a more precise sound experience for those in the audience area. The main advantage is the controllable resolution of the speakers, while the Display software is easy to use and fast. The sound is impressive, convincing and clear – you can hear every little detail.

“We now hope the new WPC will help us to win more work during the festival season.”

Summing up the investment, Balázs Szentiványi concluded: “From the price and performance viewpoint there was really no other option for TéDé.”