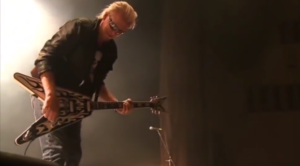 The new album—which is set for a March 2 release via Nuclear Blast—features guest appearances from Kirk Hammett, Wayne Findlay and Michael Voss-Schoen.

Along with the announcement of Resurrection, the group also premiered the album’s first single, “Warrior.”

“Warrior,” which you can listen to below, is unique in that it features Voss-Schoen and all three of the group’s vocalists, Gary Barden, Graham Bonnet and Robin McAuley.

“When Michael Voss-Schoen showed me his lyrical and vocals ideas, it instantly came to my mind that all four singers should be involved,” Schenker said in a press release. “I’m really fascinated by the result. It’s really interesting how the different voices complement each other. ‘Warrior’ is really heavy but at the same time ear-friendly and catchy!”

For more on Schenker and the new album, stop by michaelschenkerfest.com.