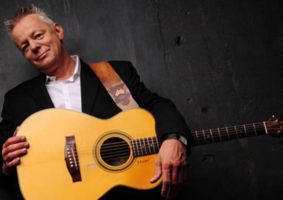 Modifying a Picking Pattern to Accentuate a Melody

The title track of my latest release, It’s Never Too Late, is a tune I wrote for my daughter Rachel.

Though I knew that the song would be an instrumental, it was essential for me to craft a melody that had a lyrical quality.

While there is no vocal, one can easily imagine words being sung, due to the clarity, strength and conviction of the melody. Last month, we covered the tune’s intro and verse sections, and now I’d like to present the intricate chorus section.

If you’ve been following these columns, you know that I rely heavily on a fingerpicking approach based on the standard “Travis picking” pattern: the bottom three strings are generally picked in an “alternating bass” pattern, with the thumb moving between the appropriate strings in a steady eighth-note rhythm, providing the low root notes and fifths of the chords. The melodic lines and higher chord tones that are sounded on the higher strings are picked with the index and middle fingers, and occasionally the pinkie.

The steady thumb movement lays down the rhythmic “grid” of the song while the index and middle fingers add the melodic notes and chord tones in varying 16th-note syncopations. Some of the patterns become tricky to execute cleanly and clearly, so strict attention to detail is essential. Additionally, the tune is performed with a capo at the second fret, which transposes everything up a whole step.

FIGURE 1 illustrates the first 14 bars of the chorus, along with the first bar of the chorus tag (which continues in FIGURES 2 and 3). I begin by fretting a Cmaj13 chord, wherein the low C bass note is fretted with the thumb wrapped over the top side of the neck. This technique is required in order to properly fret the other notes of the chord, as well as the melody. I think of this section as being built around a three-note melody sounded by the fretted notes on the top three strings. I “hear” the two higher melodic notes as stating my daughter’s name “Rachel” repeatedly.

After three bars of Cmaj13, the notes sounded on the sixth and fourth strings move down in bar 4 to sound Bm7sus4. This four-bar pattern repeats, and the chordal/melodic concept is resolved in bars 11–14, as the chords move in this way: Aadd9/Cs D7sus4 Dadd4 C(add2). Keeping the higher strings fretted throughout this section while the lower bass notes change can be a little stressful (and potentially painful) for the fret hand, so try to keep the hand as relaxed as possible.

This leads us to the chorus tag, shown in FIGURES 2 and 3: this section is also built around a repeating three-note melody, fretted on the top three strings and requiring another challenging fret-hand stretch. I use a “banjo roll”–type picking pattern to repeatedly sound the top three strings in a descending sequence. Notice how this pattern steadily floats over the top while the lower bass notes move from an open low E to A to G, then back to both fretted and open low E notes.