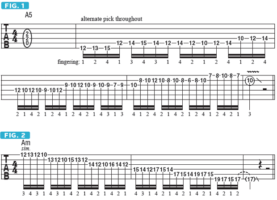 Moving Across the Fretboard in Unusual Ways to Produce Unique Runs

Over the years, people have noticed that when I play certain runs, my fingers move in the opposite direction of the notes that they hear.

For example, as my fret hand moves up the fretboard, the sequence of notes that is heard descends (and vice versa). For this column, I’ve put together a few runs that demonstrate this unusual approach as applied to both ascending and descending patterns.

This kind of “positional wizardry” can be used to generate interesting melodic patterns that can be used in a variety of ways.

In FIGURE 1, I begin on the low E string in a high fretboard position and end on a high string in a lower position. The run is based on the A Aeolian mode (A B C D E F G), which is also known as the A natural minor scale and is intervallically spelled 1 2 b3 4 5 b6 b7.

The overall concept behind this line is a consistent progression of six-note groups, or “cells,” that move to different areas of the fretboard while remaining diatonic to (within the scale structure of) A Aeolian. The run is played in a rhythm of even 16th notes, which, due to its inherent four-note grouping, results in a more unusual melodic “shape” than if I had played the pattern in a triplet or sextuplet rhythm.

I begin by ascending through the first six notes—E F G A B C—then “backpedal” slightly and descend to the previous two notes, B and A, in alternating fashion. The next six-note phrase begins on G, two scale degrees higher than the previous starting note, and consists of the notes G A B C D E, played in ascending form.

Once again, I alternate between the last two notes in the same way, which sets up the beginning of the next six-note phrase, starting on B on the fourth string’s ninth fret, which is two scale degrees higher than the previous starting point. This “up-six, back-two” pattern then repeats three more times, culminating on a high A root note. Be sure to use consistent alternate (down-up-down-up) picking throughout this figure, and, as always, strive for crystal-clear articulation.

In FIGURE 2, I begin on the high E string and work my way up the fretboard while descending gradually on each lower string, pitch-wise. Like FIGURE 1, this run is also based on A Aeolian/natural minor and six-note “cells” played in a 16th-note rhythm.

After descending through the first six notes—F E D C B A—I quickly shift up the fretboard to a note that is three scale degrees higher in the scale, D, and then repeat the descending six-note pattern. This second sequence ends on F (third string, 10th fret), so I begin the next six-note sequence three scale degrees higher, on B (third string, 16th fret).

This process repeats three more times, culminating in a low A root note (sixth string, 17th fret). Again, alternate picking is utilized throughout, so strive for even and precise execution.

FIGURE 3 provides a clearer picture of the shapes used in FIGURE 2 by illustrating them as eighth-note triplets. Here, one can more easily see how the six-note pattern descends through the notes of A natural minor across two beats at a time. When playing the run in a straight 16th-note rhythm (rather than in an eighth- or 16th-note-triplet rhythm), be cognizant of the difference in feel and where the downbeats fall.