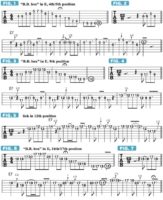 B.B. King is considered by many to be the most influential guitarist ever. From Eric Clapton to Jimi Hendrix to Stevie Ray Vaughan to Gary Clark Jr., every blues-rock player of the last 50 years owes a debt of gratitude to King every time they lean into a single-note solo.

In fact, the legendary Buddy Guy believes B.B.’s influence is so vast that his name should be engraved on every electric guitar!

Of the many signature elements that comprise B.B.’s sound, the one most often cited is his penchant for zeroing in on a specific pattern of notes and strings when playing in a given key. The pattern, which is played primarily on the top three strings and forms a visual “box” shape on the fretboard, has become affectionately known as the “B.B. box.” In this column, I’d like to outline the pattern in four different often-used positions and demonstrate a few ways to navigate through it to create some cool B.B.-style solo licks and phrases.

Most often, King’s use of this particular shape places the root note on the B string, fretted with the index finger. If you’ve ever seen the man perform, the visual and aural image of him laying into a note this way and adorning it with his massive “butterfly” vibrato is unforgettable.

FIGURE 1 illustrates the six notes that make up the “B.B. box,” as played in the key of E in fourth/fifth position. In the last two bars, I’ve included ot♯her notes that one can use to fill out the rest of the scale pattern, which is, in essence, E minor pentatonic (E G A B D), except the flatted seventh, D, is replaced by the major, sixth, C#, resulting in the note set E G A B C# and yielding a sound that blurs the distinction between minor and major pentatonic.

Played with a shuffle feel (swing eighth notes), FIGURE 2 is a five-bar solo in E that’s based on this box shape and demonstrates some typical B.B.-style licks. I begin with the notes B, C# and E, which set up the minor third, G, sounded on the downbeat of “one” in the first full bar. I then bend that note up a half step to G#, the major third. The remainder of the phrase places the E root note, B string, fifth fret, as the centerpiece.

Let’s apply this note pattern and approach to other areas of the fretboard. FIGURE 3 illustrates the “B.B. box” played in ninth position, with the E root note played on the G string’s ninth fret and additional notes added at the end of the figure. FIGURE 4 offers another solo that is played over an E shuffle groove, with an intentional nod toward the phrases played in FIGURE 2 but reconfigured slightly for the new fretboard shape. Both solos are played in the same note register, but a distinctly different feel and timbre is produced in each case because of the different position and strings used.

FIGURE 5 offers a way to move the melodic idea up one octave while utilizing a different fretboard shape. Here, the E root note falls on the first string’s 12th fret. Lastly, FIGURE 6 illustrates the “B.B. box” played 12 frets and one octave higher than initially shown in FIGURE 1, and FIGURE 7 offers a solo phrase based on this shape.