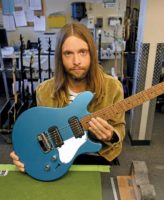 Maroon 5 guitarist James Valentine had one main goal in mind when he collaborated with Ernie Ball Music Man on his signature-model guitar: he wanted to design the perfect guitar that could get him through Maroon 5’s entire live set without changing instruments. Maroon 5 has played well over 100 shows all over the world during the two years that have transpired since the Ernie Ball Music Man Valentine first hit the market, and the band has a full touring schedule ahead of them well throughout the remainder of 2018. Fortunately, Valentine can confidently say he achieved his primary goal.

“We really hit the mark,” says Valentine, sitting in his Los Angeles home while opening a package containing a brand-new Valentine Tremolo model with Husker Red finish that just arrived. “A Maroon 5 set crosses a lot of different styles of music, and I used to bring a lot of different guitars on the road to accommodate that. But over the last two years since we built the Music Man Valentine, it’s been the only electric I’ve played on stage. I wasn’t sure at first, because you never really know until you get out there on the road. It’s really worked out. I’m really proud of it. I just use two of my Valentines, one in standard tuning and the other in E flat. Besides those I have my Martin acoustic, and that’s all I need for a set. It’s really simplified things for me, and my tech’s back is doing a lot better.”

While the Music Man Valentine was initially designed to simplify Valentine’s touring rig, he found the guitar equally versatile and essential when he was recording Maroon 5’s latest album, Red Pill Blues. “It’s all over the album for the same reasons I use it on stage,” he says. “It’s very versatile in the studio. You can get a lot of sounds from it. There are the barking, Tele-like tones that sound great overdriven, as well as a contemporary sound that is very pristine and clean like a direct-recorded guitar. The middle position with the coil tap engaged to turn the neck pickup into a single-coil gives you that out-of-phase Nile Rodgers-style, Straty funk sound, which is one of my main go-to sounds. I use that one a lot live on the classic songs like ‘This Love,’ ‘Misery’ or ‘Shiver,’ and I used it in the studio on ‘What Lovers Do’ from the new album, where there’s this straight-ahead clean, direct sound that’s doubling the bass line.”

The Music Man Valentine introduced a truly original new design inspired by the Telecaster and ES-335 that Valentine previously played most frequently, but with its own distinct personality. With its single-coil bridge pickup and neck humbucker, master volume and tone controls and three-position blade pickup selector switch, the design seems very simple and straightforward, but push/push switches on the tone and volume controls that engage neck-pickup coil splitting and up to +22dB gain boost, respectively, provide an incredibly diverse range of tones. The body curves, which are inspired by those of an ES-335, give the guitar timeless, classic appeal, and the innovative wedge-shaped body keeps the overall weight light and enhances playing comfort while retaining a contour-free slab-body design.

“I’m a different type of player than most of Music Man’s signature model artists,” Valentine says. “I’m not a shredder. I wanted to make a functional guitar first but also one that looked classic but was a new design. Aesthetically, I have very minimalist tastes. That was the most challenging part of it, and I think we accomplished that. It had to be a new design that hadn’t existed before, but you wouldn’t be surprised to see it in a pawn shop.”

While the Valentine bears James Valentine’s name, the model was actually a team effort between him and various people at Ernie Ball Music Man. “Sterling Ball [Ernie Ball Music Man CEO] has been through the process so many times that he really knows what he’s doing. I didn’t even know where to begin, and he held my hand through that process. My whole point was to do something new. If you’re not going to do that, then what’s the point? Philosophically, that’s where Sterling and Brian [Ball, Ernie Ball Music Man president] were at too. You can slap your name onto a guitar design that already exists, but where is the fun in that? It’s more fulfilling to create something new.

“It was a challenge to put a 335 and Telecaster together,” Valentine elaborates. “I had no idea what it should look like. The design guys developed the rounded cutaways using similar curves to a 335, but they did that on a slab body like a Tele. I wanted to reduce some of the body’s weight, so Sterling came up with the wedge design, which is thinner at the top and thicker at the bottom. It was perfect, because I wanted to keep the slab design—I didn’t want any contours.”

In addition to a design inspired by vintage classics, Valentine also “borrowed” a few modern features from other Music Man guitars. Valentine was impressed by the volume boost function on the Music Man Steve Lukather Luke models, and he wanted the same feature on his guitar. “It gives me a bit of extra control,” says Valentine, “especially when I’m out on the ‘ego ramp’ and away from my pedalboard. The boost is adjustable, so you can set it depending on what you want to do. It can be set to provide a nice, clean transparent boost if you have it set to +5 or +10dB, but you can also really crank it up to +22dB to really push your amp where it’s almost like a built-in overdrive pedal.”

This year Music Man added a new model—the Valentine Tremolo—and introduced three new finish options. “Everyone was clamoring for a tremolo on this guitar from the beginning,” Valentine says. “One of the first pieces of feedback we got over and over again after the model shipped was, ‘Where is the tremolo model?’ We finally did that by popular demand. It’s been fun for me to play around with the tremolo, and the Music Man system is great. It stays in tune so I can use it without having to worry about retuning the guitar.

“I also wanted to switch around the colors this time,” he continues. “The first Valentine models all had transparent finishes, so this time we decided to do solid colors. Husker Red is a tribute to my Nebraska Cornhusker roots. Toluca Lake Blue is named after a little sub-township here in Los Angeles where I play tennis. The lake is just this little manmade thing, and it’s not much of a lake at all, but it’s a tribute to my geography. I’ve always loved goldtop finishes, so I had to do Saturn Gold.”

Because of all the care and consideration that went into the Valentine’s design, Valentine wasn’t surprised that the finished version satisfied all of his needs. What did surprise him, however, was the wide variety of players who specialize in other styles who have adopted the model.

“People will post photos of them playing the guitar on social media,” he says. “That’s one of the coolest things that has happened. Almost every day there are new posts of someone playing my guitar. Through those posts, I can see players from all these different backgrounds and genres playing this guitar. I’m stoked that people are enjoying it. Anybody who is out there playing it should tag their videos or photos of them playing to @JamesValentine. I love seeing it out in the wild.

“I knew country players would dig it because of its Tele heritage,” he continues, “but I’ve also seen all of the various enthusiasts of Ernie Ball Music Man guitars with it. I’ve seen them turn up a lot in worship and church bands as well as R&B groups, which is cool because our sound leans a lot toward R&B. When I was at Coachella I saw Peter Svensson with the Weeknd playing it. To see it in the hands of Joe Walsh was really cool. For me that was, ‘Done. Pack it up.’ Nothing could be more awesome than that.”