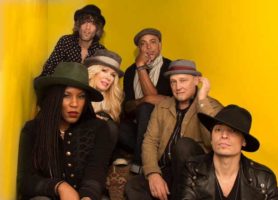 Their debut single is the infectiously funky “Get Loud,” which you can check out below. It’s a women’s anthem with a laid-back, power-driven groove that provides a solid acoustic/electric foundation for Warfield’s sultry vocals.

Roadcase Royale will make their live debut performance at this year’s Rock Against MS Benefit Concert, which will take place Saturday, March 25, at the historic Los Angeles Theatre. Wilson will perform as part of an all-star band during the event—and Roadcase Royale’s headlining performance will follow.

I recently caught up with Wilson to get her thoughts on Roadcase Royale and the Rock Against MS event.

How did Roadcase Royale come about?
We saw Liv on Jimmy Fallon playing with a group, and she was doing this amazing song called “Why Do You Lie” that her guitar player wrote. We were blown away. Heart had a few shows coming up at the Hollywood Bowl, and we wondered if she’d be interested in opening for us. We got her to come and play and Liv and I just became fast friends. She’s the sweetest person and a wonderful human being and has a voice that’s so powerful.

We really hit it off and said we should do something together. So we got together with some of my guys and Ryan Waters and started writing. Everything worked so well right off the bat.

How would you describe the sound of Roadcase Royale?
I call it muscular rock and roll with a flavor of R&B. There’s also plenty of dimension in it for more romantic balladry. We’re flexible musically and can do stuff that’s way R&B or way heavy rock. We’ve got a five-song EP that’s almost ready to come out where you’ll hear all of those things.

How does the writing process for Roadcase Royale differ from writing with Ann Wilson for Heart?
It’s actually kind of similar. Ann always has really cool lyric ideas. We’ve both got a notebook that’s full of lyrics and song titles, and so does Liv. In the case of Roadcase Royale, everyone in the band has a lot to offer as a writer and producer. Dan Rothchild has a song with lyrics and cool musical parts that were going to do. Our drummer, Ben Smith, is working with Liv and Ryan, and then Chris Joyner was the one who came up with “Get Loud.” We all contribute and listen and know how to communicate our ideas to each other.

Can you tell me the origin of “Get Loud”?
Chris had this song laying around without any melodies or words. He had the groove, and I thought we should try to do something with it. I had some words from my longtime collaborator that was a real woman’s anthem. Around that same time, the Women’s March was about to happen. All of those things kind of coincided in a beautiful moment. So we took the words and then me and Liv re-wrote and made melodies for this terrific track, and there’s “Get Loud.”

There are so many different flavors to the band’s sound. Was it difficult for you to alter your playing style for this role?
I’m a chameleon when it comes to guitar playing and like to stretch out into different territories. I’ve always loved R&B, folk, pop and heavy rock, and this band allows me to stretch out a little bit more into something that doesn’t necessarily sound like Heart. But then again, when we do “Crazy on You,” it’s going to be really cool to hear Liv Warfield sing it. We’ll bring some other Heart songs into the live show, of course, because people want to hear them. We’ll probably do “These Dreams” and “Two” from the Beautiful Broken album.

How did the band become involved in Rock Against MS?
We got hooked up with Nancy Sayle, who is in her fifth year of doing this event. She got wind of Roadcase Royale and asked if we’d be interested in debuting at Rock Against MS, and we said absolutely. It was the perfect idea for an out-of-the-box rock show. It’s a great cause and a wonderful opportunity. We’re going to be closing the whole show.

Do you have plans on touring Roadcase Royale?
Yes! We’re working on putting some things together for April and are hoping to go through the summer and keep going. It looks like Roadcase Royale is going to have a chance to get out there and have a blast.

What are you most looking forward to about this next phase of your career?
I’m forever the optimist and look forward to fulfilling things in my life as well as being with my kids and having some home time. I’m also looking forward to getting this rock band on the road. That’s what I do!

Just the Facts: Rock Against MS