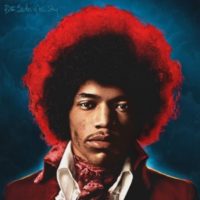 New Jimi Hendrix Studio Album, 'Both Sides of the Sky' Coming This March

The album—which features 10 previously unreleased tracks—completes a trilogy of posthumous studio releases that began with 2010’s Valleys of Neptune and continued with 2013’s People, Hell and Angels.

The tracks on Both Sides of the Sky were recorded between January 1968 and February 1970, with both the Jimi Hendrix Experience and the Band of Gypsys. The album also features guest appearances from Stephen Stills—in a remarkable, pres-CSNY version of Joni Mitchell’s “Woodstock” and an original called “$20 Fine”—and Johnny Winter, on a version of Guitar Slim’s “Things I Used To Do.”

Significantly, the album’s opening cut—a version of the Muddy Waters classic “Mannish Boy” —was recorded on April 22, 1969, with Billy Cox on bass and Buddy Miles on drums. This trio, of course, came to be known as the Band of Gypsys, and “Mannish Boy” is a relic from the trio’s first ever recording session.

Both Sides of the Sky was produced by Janie Hendrix, John McDermott and Eddie Kramer, who served as the recording engineer on every album Hendrix made during the his lifetime.

You can check out the tracklist of Both Sides of the Sky below, and preorder the album here.

Both Sides of the Sky tracklist:

Randy Rhoads: "I started tuning up and Ozzy said, 'You've got the gig.' I didn't even get to play!"

Find the right pedalboard solution for you on eBay