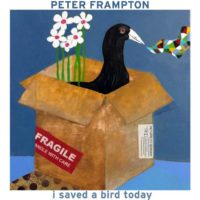 A while back, a bird crashed though Peter Frampton’s window. That experience—and the guitarist’s efforts to help the defenseless animal—led to a new song, “I Saved a Bird Today.”

Today, GuitarWorld.com presents the exclusive premiere of the track, plus Frampton’s just-announced tour dates, all of which you can check out below.

The song, which features a melodic acoustic guitar solo that starts at the 2:50 marker, strikes the ear as a nod to a few of Frampton’s influences and friends; there’s a touch of Django Reinhardt in the intro and an unmistakable smattering of what can only be called “George Harrison chords” during the verse (2:26).

“‘To care for one another is the reason we are here’—this lyric sums up the song for me,” Frampton says.

“We are all in uncharted territory right now. ‘Perhaps today, [the bird] was on her way to rescue me,’ which doesn’t seem too far off from what we all need. Politeness and caring for each other cannot be a thing of the past. I can’t explain how great the feeling was to have saved a life. Peace, love and truth trump hate every time.”

The new tour dates include a relaunch of Peter Frampton Raw: An Acoustic Tour, which features longtime collaborator Gordon Kennedy and Peter’s guitar-playing son, Julian. Frampton also will tour with the Steve Miller Band this summer. See below for full routing details and visit frampton.com.

“I Saved a Bird” today will be available via Amazon and iTunes Friday, March 10.