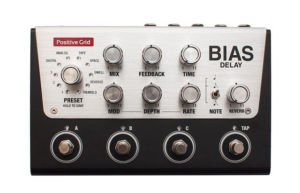 Positive Grid, creator of the BIAS Amp and BIAS FX guitar amp processors, has announced the BIAS Delay hardware pedal. From the company:

A first of its kind, the BIAS Delay pedal works both as a standalone pedal and as part of an integrated desktop and mobile system, connecting to computers via its Micro USB port and to iPad via built-in Bluetooth. Using BIAS Delay pedal with the optional BIAS Pedal desktop (Mac/Win) software and iPad app, guitarists can deeply customize and remotely control the hardware’s effects parameters and share and download thousands of custom presets on Positive Grid’s acclaimed ToneCloud social network.

Share and download delay pedals
With the BIAS Delay hardware pedal, musicians aren’t limited to designing their own custom pedals. Using BIAS Pedal desktop software or app, players can access Positive Grid’s popular ToneCloud network, where they can share and download thousands of delay pedals created by fellow musicians—including signature recording artists—from around the world. After downloading presets from ToneCloud, it’s a simple matter to import them into the BIAS Delay pedal.

Stores two banks of presets, each containing ten slots for storage of factory and custom presets

Separate MIDI In and Thru connectors

BIAS Delay Pedal will be available in stores worldwide in spring for $349. For more information, visit PositiveGrid.com.