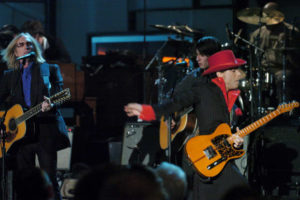 In 2004, Prince joined longtime George Harrison cohorts Jeff Lynne, Tom Petty and Steve Winwood for a performance of the Beatles’ “While My Guitar Gently Weeps.”

The occasion? Harrison’s posthumous induction into the Rock and Hall of Fame. Harrison died three years earlier in November 2001.

The interesting thing about this clip, which also features Harrison’s son Dhani and a few members of Petty’s Heartbreakers, is how Prince (and his roadie, of course) make his guitar—a Tele-style H.S. Anderson Mad Cat—disappear. Prince doesn’t enter the video until 3:28, but when he does, it brings the intensity up a few notches (no offense to Petty and Lynne, Harrison’s former Traveling Wilburies bandmates).

In the days after Prince died, The New York Times ran an article about the performance in which Petty and others who performed with Prince that night shared their memories.

According to The Times, the show’s producer, Joel Gallen, asked Prince to play the song’s solos, since he was there to be inducted anyway. But during rehearsals, Marc Mann, who plays guitar with Lynne, took over, knocking out a note-perfect recreation of Eric Clapton’s original mid-song solo.

“And we get to the big end solo,” Gallen says, “and Prince again steps forward to go into the solo, and this guy starts playing that solo too!”

There wasn’t time to get it right, but Prince assured Gallen everything would be fine at the performance. He told the producer to let Mann take the first solo, and he would perform the extended outro solo. “They never rehearsed it, really,” Gallen says. “Never really showed us what he was going to do, and he left, basically telling me, the producer of the show, not to worry.

“And the rest is history. It became one of the most satisfying musical moments in my history of watching and producing live music.”

The smile on the face of Dhani Harrison—George Harrison’s son, who plays acoustic guitar on the number—shows how much he was enjoying Prince’s star-turn on his father’s song.

“You see me nodding at him, to say, ‘Go on, go on,’” Petty says. “I remember I leaned out at him at one point and gave him a ‘This is going great!’ kind of look.

“He just burned it up. You could feel the electricity of ‘something really big’s going down here.’”

But what about that disappearing guitar? Once it leaves Prince’s hands, it never reappears, and the video shows no one catching it. Even Petty’s drummer, Steve Ferrone, remains confused about it—and he was onstage.

“I didn’t even see who caught it,” he says. “I just saw it go up, and I was astonished that it didn’t come back down again.

“Everybody wonders where that guitar went, and I gotta tell you, I was on the stage, and I wonder where it went, too.”