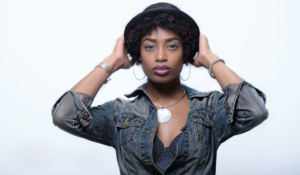 Producer, musician and songwriter Karis Taylor, aka K-Minor, is among the most exciting studio talents in the UK at the moment. A regular presenter at Red Bull Studios’ monthly Normal Not Novelty nights, she also hosted a Women In The Studio panel at AIM’s (Association Of Independent Musicians) Women In Music event earlier this year and is soon to unveil her first self-produced record. Daniel Gumble sat down with her to find out more about one of the industry’s brightest stars…

Tell us about your background in music?

My love of music probably goes all the way back to when I was in my mum’s womb. She literally used to put me up against a speaker and play music through her belly to me. My parents were both musical. My mum had always been singing and had the opportunity to tour in Asia but she had to turn it down because she had kids at quite a young age. My dad was in a reggae band for a number of years; he knew Mighty Diamonds, Bob Marley, some real icons, so I was always around reggae artists coming to the house and jamming in the front room. It was really inspiring and pretty insane when I think about it now. Not a lot of people I knew at the time had that strong musical influence in their house. That’s where it really started for me.

What attracted you to the world of production?

I played piano and violin when I was little and from around age 12-13 I started getting into recording. My dad used to fix old computers; he’d take bits of old broken models and build new ones, and he built me a computer for my birthday and gave me a really old version of Cubase and said it would be a really good way of learning how to record. That was my introduction to recording and production. From there I’ve not looked back. I continued to try to learn as much as I could with whatever resources I had. I went to a lot of after school activities for people interested in production. In those days, nine times out of 10 I was the only female, which was weird. That’s so uncommon now, which is beautiful. It’s changed a lot since then.

That progressed to me getting involved in an event called Jump Off, which was a hip-hop night with lots of different battles, like rap battles, crew dance battles, and they also had a production battle, which I did at 16 when I wasn’t even supposed to be in the club! I managed to get in and win five times in a row, which was amazing for little 16-year-old me. I lost the sixth one to Mr Hudson before he became famous!

Have you always been keen to incorporate your musicianship in your production process?

Yes. Even after Jump Off I got into a lot of session work as a pianist, guitarist and backing vocalist with the likes of Jodie Abacus – before he was Jodie Abacus – and Ray BLK. We were actually in a rock band together at one point! From there, while I was dabbling with that, I was still producing but would also incorporate a lot of my guitar and piano skills. You have to have some level of understanding when it comes to things like chord progressions. It’s certainly a benefit to know how all that stuff works.

Did you have any formal training in production?

I studied music technology in college. It gave me insights on how to build a studio, what kind equipment to use. That technical knowledge was what I needed. I took what I learned from that course and ran with it. I was one of very few females in my class, there were 20 students and only three were female.

Did that present any difficulties?

By that stage I was so used to it that it wasn’t really a thing. I was never conscious of the fact that I was one of very few girls; I just knew that I loved making music. Because I’d been involved in so many musical things before, like mini music tech courses etc, that were so male dominated it wasn’t out of the norm for me. I didn’t face any hardships at all. I liked surprising people who presumed I was a singer or knew nothing about production; they’d hear something I’d done and be like, Where did that come from?! I like challenging people in that sense.

How did you progress from college to a professional career in the studio?

I feel like I’m still on my journey. Incrementally, my goal is to win a Grammy, so I feel I’m a big step away from that right now. The things that have solidified my place as a professional producer stem from remixing. Three years ago I started remixing as a way of breaking my name into the industry. That helped because I started getting some traction off of the music I was making. I was doing a lot of house and garage, and a lot of the remixes were authorised by the artists themselves.

I did remixes for Mila Falls, Leonn and Hannah V for a track she did with Louise Labelle. Seeing how they gained traction with radio play on Rinse FM and Kiss Fresh and a number of underground stations really solidified my name as a producer. Later this year I’m going to release a track that I’ve written, produced and sung on, which is a big deal for me as I’ve always seen myself just as a producer. That will be my first full release as a solo artist. Also, Red Bull Studios’ Normal Not Novelty events have helped me make a huge progression in my career. It’s an amazing platform for so many people.

Talk us through your studio setup and the making of your upcoming record?

I work off my MacBook Pro and I have Maschine MK III. I also have a Universal Audio Apollo Twin, as well as a Novation keyboard and a Neumann U87 Ai mic. It’s in a very small room in my flat, but it’s perfect for recording vocals. When it came to recording the single, it started by thinking about the concept of what I wanted to express, then I wrote the lyrics and produced the track around that. That’s not how I normally work, but I’m quite experimental in the studio. When it comes to working processes in the studio it’s just about having fun but also having discipline. That’s what I did with Let Go. I had a lot of fun making it and I find when I’m having fun making something it comes together far more effectively. If I overthink things too much or don’t have a clear concept from the start, that doesn’t help.

A friend of mine brought the first Normal Not Novelty night to my attention and I thought it sounded like a great thing to go along to. I went to the first one and left feeling overwhelmed. It was one of the best experiences I’ve had in my life. I know that’s a lot to say, but I’d never been in an environment before where there were so many different women, no ageism, no racism, no classism. The level of support felt in that environment was amazing. Having gone along as a spectator, I approached Brendon Harding (head engineer, Red Bull Studios) and let him know how much I felt what he was doing and that I would love to get involved in any way possible, because I was so taken aback by it all. I’ve been to a lot of female events but nothing had felt like this. It has something special. So, I got a call from him before the next session saying, Do you fancy hosting one of the production workshops? And I haven’t looked back since. I now host the electronic workshops for Normal Not Novelty every month.

How would you have felt if you had something like Normal Not Novelty to support you when you were a budding teenage producer?

Do you think such initiatives are making a tangible difference to attitudes in the industry?

These conversations need to be had. And I do feel like long-term it is making a difference, without you even being conscious of it. Of course, more needs to happen across the industry but we’re in the early stages. It’s only over the last 12 months, two years at most, that the subject has really blown up, particularly with things like the gender pay gap. There are a lot of things happening at the moment and music is one aspect of a bigger picture for women in the world. So yes, I feel events like the AIM Women In Music event needed to happen. Whether people agree or not, it starts a dialogue. If we continue to capitalise on what we’re doing now, then it will continue to make a difference