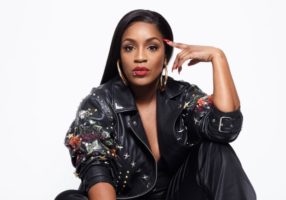 ‘Production is about being the person with the vision’: Beyonce songwriter Carla Marie Williams on producing her own EP

Carla Marie Williams is not, and has never been, one for doing things by halves. Her reputation as one of the most in-demand studio talents in the business stems from a heady mix of boundless ambition, a ferocious work ethic and an irrepressible drive to succeed at whatever creative endeavour she sets her mind to.

A producer, songwriter, A&R executive, relentless campaigner and a great deal more, Williams has come a long way from her humble beginnings growing up in a single parent home in west London. As a songwriter and producer she has accumulated six Top 10 hits, an Ivor Novello nomination and attained BRIT Awards success on account of her work with the likes of Beyonce, Britney Spears and Girls Aloud. She also launched her own girl band, RD, plying her trade in each and every aspect of their creation – seeking out the members, A&Ring them, writing their songs, managing them and producing them.

If this multi-faceted career path wasn’t expansive enough, in 2016 she launched Girls I Rate, a community aimed at providing networking and educational opportunities for up and coming female producers, songwriters and performers.

“I’ve got a fighting spirit, I came from a single parent home and I didn’t have anything, so I just took every opportunity thrown at me,” Williams explains as she discusses her formative years. “My mum was pretty strong and she made me resilient in any environment.

“When I first started I was just writing poetry at school and as I got into my late teens I met a guy who played guitar and wrote songs. I remember reading him my poetry down the phone and him singing a melody back to me using my lyrics, which I thought was amazing. We ended writing songs together; then we started going to studios and building our songs up with producers. That was how I went from being a songwriter to learning how to bring my records to life.”

She continues: “From that I got into working with [songwriting and production company] Xenomania as a top line writer with Girls Aloud. During that time I decided that I wanted to make some more organic music, so I set up a band and we would record ourselves live at a studio, and I’d be working with the producer to bring those songs to life.”

Given the significant acclaim she has achieved penning multi-platinum hits for numerous pop heavyweights, Williams is now looking to emulate her songwriting success as a producer.

“I’m still in the early stages of being acknowledged in the production world,” she states. “For me, production is not about the people touching the buttons, it’s not about the beat maker, it’s about being the person with the vision. And one of the most exciting things about being a producer is working with engineers who get your vision and can bring your ideas to life.

“I remember making What You Need for Britney Spears and, after meeting her, going away and writing writing the chorus. I sent the voice notes and described the direction I wanted the song to go in to the engineer and the next day he had it ready for me. Then I played it to her and we wrote the rest of the song together. That was one of my career highlights so far.”

Despite having sampled life in just about every capacity the music business has to offer, last year saw Williams take the decision to emerge from behind the scenes and take centre stage with the release of her first release as an artist in her own right. Due for release later this month, Williams’s debut solo record (its title and release date are still to be confirmed at time of going to press) is a genre spanning collection of songs reflecting not only her diverse musical tastes, but also her equally diverse skillset.

“I decided about six months ago I wanted to make an EP – I knew I wanted to do something but I wasn’t sure in what capacity,” she tells PSNEurope. “I never really wanted to be an artist, I just like making music. But that meant I didn’t have an outlet unless it was with another artist. So I thought, I’ve got some great songs I could make with my team and they were all really positive, female empowerment-lead songs. I called in some female producers; a young girl called Karma and another girl called Tallia and it worked out great. Now I just want to keep putting out singles and EPs and keep featuring all my favourite artists around the world.”

The theme of female empowerment feeds very much into Williams’ Girls I Rate organisation, which has snowballed at a rate of knots since its 2016 launch. Over the course of the past two years, it has received nationwide media attention and support from stars including Lily Allen, who has been a vocal advocate of the campaign and has appeared at Girls I Rate events aimed at unearthing the most exciting new female talent in the business.

Williams says she decided to launch Girls I Rate following her own personal experiences in the industry and the frustrations of establishing herself in such a male-dominated environment.

“After coming out of that situation with my girl group I found myself quite isolated,” she reflects. “At times I felt frozen out from the industry because people thought I was difficult, just because I was trying make something that had gone wrong right.

“I was really young and a little inexperienced and possibly wasn’t fully aware of how the industry worked. So I started Girls I Rate to meet more female creatives, because I didn’t really know any. All the people I knew were men and I found that a bit frustrating. So I put a dinner together with 100 women and decided that it would happen on International Women’s Day. 100 women turned up, Channel 4 turned up and it was a great start to a movement.”

She continues: “After that I had to reflect on whether or not it was just a celebration of women or whether I wanted to pioneer change and opportunity for females in the industry. So I started the GIR Arts Academy, which is aimed at girls aged 16-30 wanting to get into the industry through weekenders, workshops and masterclasses. We now work with the PRS Foundation doing weekenders on writing and recording. I also work with PRS on an event called Get Heard, which puts young women in front of A&Rs, publishers, managers and top people from the industry. Hopefully different things will come about from that.

“We are – funding permitting – trying to launch weekly weekend courses that would provide training in all creative capacities. We’re hoping we can get some donations from tech companies who can help offer programmes that will develop [producers] in our space, because that’s what we’re lacking at the minute.”

According to Williams, Girls I Rate looks set to continue growing and growing throughout 2018 and beyond, such is the demand for its services.

“I get demos and beats sent to me daily,” she says. “Over the past two years we’ve had over 2,000 advocates that have signed up and come to our different events, so I’ve definitely seen the progress. And I definitely feel Girls I Rate is going to become the go-to place for A&Rs to find talent. We call them the GIR army – we’ve definitely got an army of girls out there who really push hard for us.”

Having achieved so much in her career to date, and with her Girls I Rate work opening so many doors for the next generation of female creatives, is there advice Williams would like to have been able to impart to her younger self?

“I actually love my journey,” she concludes. “I’m just a girl from round the way and I feel like the world is my oyster. So I’d just tell that little girl to keep going.”