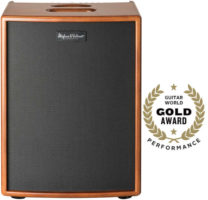 A little less than a year ago, we took a look at the very first Hughes & Kettner acoustic-electric guitar amplifier, the era 1. Shortly after that review appeared, Hughes & Kettner announced a second model, appropriately called the era 2. While we loved the extremely compact dimensions of the era 1 and its impressive list of professional features, we could understand how some guitarists would want or need a bigger amp with louder volume output. That is exactly what the era 2 delivers. Overall, the main features of the era 1 and era 2 are identical, so if you absolutely loved the sound quality and versatility of the era 1 but just needed something louder for playing with a predominantly electric band or for filling much larger venues, the era 2 is the perfect choice.

FEATURES With the exception of four details, the era 1 and era 2 share the exact same features and specs. The differences are that the era 2 has two 8-inch speakers (instead of one), the power amp’s output is 400 watts instead of 250, the cabinet is about 7.5 inches taller (but the base footprint is the same) and the amp is about 10 pounds heavier. The era 2 offers a wood cabinet or black-textured covering options and includes four channels, 16 digital effects, 3-band EQ and a generous selection of outputs. Channels 1 and 2 handle acoustic-electric guitar and/or vocal mic applications, and each channel features a combo XLR-1/4-inch input jack, its own independent set of 3-band EQ controls, an independent rotary switch for selecting any of the 16 FX presets, FX volume control and switches for engaging a -10dB pad, pre-EQ tone shaping, mute function and two different EQ modes. Channel 3 is designed for external audio sources and features a 1/8-inch input and volume control. There’s also an effects loop that can optionally be employed as a fourth input channel. Finally, an optional two-button footswitch can mute the amp and toggle the FX on and off.

PERFORMANCE We were very impressed with the mighty volume output and pristine sound quality of the era 1, but the era 2 takes things even further without a significant increase in the amp’s overall size or price. In addition to its noticeably louder volume output, the era 2 also delivers richer, fuller bass and allows an acoustic-electric guitar to hold its own with electric guitars in a band setting. What’s more, that extra power and bass response make it a suitable companion for instruments with lower frequency ranges and players who incorporate percussive styles—and for use with drum machines. The increase in power output even seems to enhance the three-dimensional quality of the built-in effects, particularly the reverbs, which sound even more lifelike and lush.

● The era 2 features two 8-inch speakers and a 1-inch dome tweeter that deliver crystal-clear sound in conjunction with the built-in 400-watt power amp.
● Individual FX processors with 16 presets are provided for channels 1 and 2 to provide guitars and/or vocals with professional polish.

If you loved the impressive sound and professional features of the era 1 but just needed something louder, the era 2 delivers the volume and performance you need.