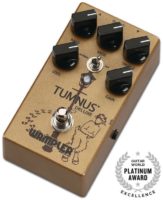 If you follow the trend of most pedal manufacturers, the idea is to release a novel pedal, and if it’s a hit, follow up sometime later with its mini-pedal version—because everyone wants mini-pedals now.

Jumping ahead of the trend, Wampler released a remarkable mini-pedal called the Tumnus, an uncannily accurate Klon-clone that nailed that legendary sound. Now, Wampler bucks the trend by introducing a full-sized iteration of that overdrive called the Tumnus Deluxe. With a 3-band EQ and increased gain, dare I say the Tumnus Deluxe sounds even more magical than its predecessor? Well, if moving in reverse is wrong, then I don’t wanna be right, and I like your style, Brian Wampler.

The Tumnus Deluxe features the same aged gold finish and incredible tone as the Tumnus but adds more flexibility in shaping your sound with controls for Bass, Mids, Treble, Level and Gain. There’s also a Normal/Hot switch that introduces more gain into the circuit, and a side-mounted buffer switch for selecting buffered or true bypass operation. The pedal operates either with a 9V battery or AC adaptor, and also features Wampler’s rugged, soft touch footswitch.

Combining detailed grit and wide-open headroom with sparkling clarity, the Tumnus Deluxe is an overdriven elixir that will strengthen any guitar and amp combination. I hate to sound so cliché, but man, it’s completely transparent when used as a boost and totally organic in its warm overdriven crunch. The pedal is so spot-on in its compression and natural break-up that you’ll forget it’s coming from a pedal and not your amp. I also loved how the Bass and Mid controls work harmoniously as a cut/boost to precisely fine-tune the pedal’s response from whatever amp you use it with. For its tube-like character, the Tumnus Deluxe is the real overdriven deal.