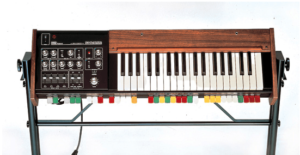 Ikutaro Kakehashi, the founder of Roland and one of the most important figures in the development of modern musical instruments has died, aged 87.

Born in 1930, in Osaka, following a long period of enforced hospitalisation due to TB, and unable to take up his place at university as a consequence, Mr Kakehashi developed an interest in radio engineering, eventually opening Kakehashi Musen (‘Kakehashi Radio’) a small electrical appliance shop in the city. There his entrepreneurship flourished alongside his interest in music and the business eventually grew to become the Japanese partner of the US Hammond Organ company.

Mr Kakehashi had had a dream, as he put it in his 2002 autobiography ‘I Believe In Music’: ‘to make an electronic unit capable of playing a single-note melody freely.’ Hearing an electronic organ being played in a church, he said: ‘The live sounds from that small-sized electronic organ impressed me more than any recordings of pipe organs I had ever heard. Even if I had had the opportunity to hear a pipe organ in person, I doubt that it would have motivated me to think of trying to manufacture one,’ he wrote.

Kakehashi Musen changed its name to Ace Electrical Co. Ltd, and in 1960 he set up Ace Electronic Industries Inc, to manufacture instruments. Unable to finance the manufacture and sale of his first product, he was introduced to the Matsushita (Panasonic) company and so his first electronic organ – the SX-601 – was actually sold under the National (Technics) brand.

By 1964 Ace took its first steps on its own, with the Rhythm Ace R-1, which showed not only Mr Kakehashi’s design abilities but also a gift for manufacturing. In 1967, Hammond began importing Ace’s rhythm units for incorporation into their own products and in 1968, Mr Kakehashi jointly formed Hammond International Japan. Meanwhile, Ace continued in business on its own account.

Ace was not to be the success he had hoped for, however, and after some business setbacks, Mr Kakehashi went on to found Roland in April 1972. Explaining is choice of name, he wrote: ‘I decided it (the company’s name) should have two syllables and that it should include the voiced (rather than hard) consonants, in order to be most pleasing to the ear. The letter R was chosen because it was not used by many music companies: therefore it would stand out clearly in industry listings or trade show indexes.’

Helped by Great West Imports in Canada, Multivox in the USA and Danish company Brodr-Jorgensen in Europe, Roland was soon on the move.

Mr Kakehashi’s preferred method of handling overseas distribution appears to have been the formation of joint venture companies but he had been unable to do this with Brordr-Jorgensen, the Danish firm that controlled nearly a third of Roland’s sales. In 1980, Brodr-Jorgensen collapsed spectacularly, more or less at the same time as the value of the Japanese Yen soared against European currencies. The two events hit Roland hard and the company would have failed had a Japanese bank not come to its rescue. In 1981, however, the business was back on course and Roland UK was formed, followed by operations in Germany, Switzerland and Scandinavia.

While demonstrating considerable skills as a businessman, Mr Kakehashi’s undoubted gifts as a developer of musical instruments also showed no sign of abating. The company notched up countless firsts, including the first electronic piano with touch sensitive keys (the EP-30), arguably the world’s first guitar synthesiser (the GS/GR-500) and was a leader in the manufacture of affordable synthesisers and keyboard products, not to mention the ubiquitous Boss effects. Perhaps one of its most iconic products was the TR-808 drum machine. Launched in 1980 and actually only in production for three years, it became ubiquitous throughout contemporary music and is still widely used today, notably in hip-hop. A year after the TR-808, in 1981, it was Mr Kakehashi who first proposed the idea of what was to become the MIDI standard which he suggested to the US synthesiser maker Tom Oberheim.

In 2001, Mr Kakehashi resigned his position as Roland’s chairman and was appointed Special Executive Adviser of Roland Corporation. In 2013, the year he finally parted company with Roland, he received a technical Grammy along with Dave Smith for the invention of the MIDI standard. In 2014 he founded the ATV Corporation in collaboration with a group of former Roland associates around the world.