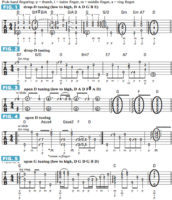 Ry Cooder’s eclectic discography dates back to the mid Sixties, when he contributed to records by Taj Mahal, Captain Beefheart, the Rolling Stones and Randy Newman.

Since 1970, with the release of Ry Cooder, the sublimely tasteful fingerstylist has issued over a dozen solo albums, mostly showcasing his unique arrangements of obscure blues, gospel and folk, to Tex-Mex, Hawaiian and Calypso songs; the majority of Cooder’s original music can be found in film soundtracks.

Commonly credited with turning the Rolling Stones’ Keith Richards on to open-G tuning, Cooder also introduced much of the world to traditional Cuban music with the success of Buena Vista Social Club (the 1997 album and 1999 documentary). Among other accolades, the expressive axman even battled the devil (Steve Vai) in the film Crossroads (with actor Ralph Macchio faking Cooder’s parts onscreen) and emerged victorious. Let’s examine Cooder’s tunings, fingerstyle grooves and slide tricks.

Tune your sixth string down one whole step (drop-D tuning) and let’s look at FIGURE 1, a passage reminiscent of Cooder’s rendition of “Maria Elena,” which appears on his 1972 album Boomer’s Story. Ry stays faithful to the song’s groovy Spanish origins (penned by Lorenzo Barceleta), its groovy quarter-note triplets (the sixth and third intervals on the high strings) picked atop bass notes on beats one, three and four.

“FDR in Trinidad,” akin to FIGURE 2, is another drop-D gem and appears on Cooder’s 1971 album, Into the Purple Valley. Though it features chord changes similar to “Maria Elena,” note the distinctive difference in approach—broken chords, picked in interesting intervallic fashion (keep your fingers fretted for the duration of each chord) and syncopation (chord changes occurring on the “and” of certain beats).

FIGURE 3 is a slide guitar example performed in open-D tuning (low to high: D A D F# A D) and modeled after “Paris, Texas” (from the 1985 film of the same name…a fantastic guitar-based film score!).

To ensure intonation accuracy on the high strings (while alternating bass notes drone), position the slide parallel to and directly over the specified frets (lay the slide across fretboard so that it only contacts the strings, don’t press it down into the frets). When applying vibrato with a slide, to reduce noise while you rapidly wiggle the slide to the left and right side of indicated notes, use your extra fingers to dampen the strings behind the slide. Additionally, try to mute the strings you don’t wish to sound by touching them with any unused pick-hand fingers.

Cooder’s other go-to slide tuning is open-G (low to high, D G D G B D), although he primarily reserves this for electric playing. We’ll close this lesson with FIGURE 5’s open-G feast (played without slide), similar to the master guitarist’s live version of “Across the Borderline” (penned by Cooder, Jim Dickinson and John Hiatt and originally recorded as the title track to the 1993 Willie Nelson album).