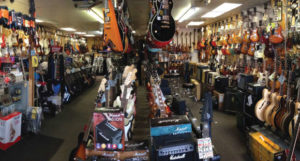 In 1980, with no previous business experience, Jim Duncan and Bill Townsend quit their jobs as commercial carpenters and opened up a little resale shop in Southwest Houston. After 10 years in operation, with Bill moving to Austin, Jim focused his inventory primarily on left-handed guitars and found his niche. Southpaw Guitars is now considered by many lefties as the location to find their next guitar.

NUMBER OF INSTRUMENTS CURRENTLY IN STOCK Jim Duncan (Owner): Around 1,000.

COOLEST INSTRUMENT CURRENTLY IN THE SHOP A 1964 P bass lefty.

FAVORITE INSTRUMENT YOU EVER SOLD A Fifties Strat now owned by Steven Seagal. He calls it “Woody.”

MOST EXPENSIVE INSTRUMENT YOU’VE EVER SOLD We sold the only original reverse lefty Firebird 7 that I know of.

MOST SOUGHT-AFTER INSTRUMENT BY CUSTOMERS Gibson Explorers, Vs and Fender Jazzmasters.

BIGGEST PET PEEVE AS A SHOP OWNER People coming into our store and asking for the name of another site that will sell gear cheaper.

FAVORITE CELEBRITY ENCOUNTER When Ted Sablay was hired by the Killers as a hired gun, they sent him to Houston and he picked up 10 guitars. Ted is holding down the lead guitar slot on the Killers’ present tour. And even though they’re not so well-known in America, Germany’s coolest band Die Toten Hosen’s lead guitar player, Andreas von Holst, manages to pick up two or three while on holiday every year.

MOST COMMON SONG OR RIFF WHEN TRYING GUITARS It used to be “Crazy Train,” but it’s all over the map nowadays. What’s the best song to try out a guitar to? Anything by the Beatles.

THE ONE PIECE OF GEAR EVERY PLAYER SHOULD HAVE A tuner of some kind.

ADVICE FOR SOMEONE LOOKING TO BUY A GUITAR If you are a beginning lefty player, have someone hand you a broom. Pretend it’s a guitar. If the top of the broom is in your right hand, you will play lefty. Surprising to most people, 20 percent of all lefties will play right-handed and of the ones that do play lefty, 10 percent will play with the big E on the bottom.

BEST PART ABOUT OWING A GUITAR SHOP You can play what you want and when you want.

From rapid-fire nu-metal to neo-neo-soul: here are this week’s essential guitar tracks

Epica’s Mark Jansen: “I cannot stand when things stay the same for too long”

Molly Tuttle releases new cover EP, …but i’d rather be with you, too