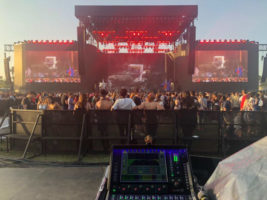 Allen & Heath’s dLive digital mixing systems were in use on multiple Coachella Festival stages in support of a diverse lineup of musical acts and production needs.

Launched in 1999, Coachella has grown into a premier music and arts festival, grossing over $114 million and drawing over 250,000 attendees annually. Coachella 2018 saw a large number of dLive artists on the lineup, including BØRNS, Hayley Kiyoko, Nile Rodgers & Chic, Nothing But Thieves, PVRIS and The Neighbourhood.

The dLive C1500 Control Surface was a popular choice across Coachella festival stages. The C1500 is the first rack-mountable surface for the dLive system. Packed in a diminutive frame are 12 faders over 6 layers, built-in audio I/O, an audio networking port and a 12″ capacitive touchscreen. All dLive Control Surfaces pair with a MixRack to deliver 128 input processing channels, 16 stereo FX returns and a configurable 64 bus architecture, all at 96kHz, while providing class-leading latency of 0.7ms.

Michael Bangs, Allen & Heath USA live sound touring manager, said: “Sometimes coming into a festival environment as a visiting artist is a real pain — getting a large mix surface into the FOH position is frequently just impossible. We saw many acts bypass this limitation with the [Allen & Heath dLive] C1500, carrying in a flyable 19” wide desk with the horsepower and capability of desks literally four to five times the size.”

In addition to traditional FOH/monitor console support with dLive, compact Allen & Heath Qu Series mixing consoles were deployed to cover a wide range of production duties. A number of Qu production desks were used to play house music while FOH consoles were swapped from act to act, support event announcement playback and carry ‘shout box’ communications for production staff across stage positions and from monitor world to FOH.

“While engineers love to drool over high-end desks like dLive, it is easy to forget some of the unsung production gear heroes at these types of shows,” added Allen & Heath USA marketing manager Jeff Hawley. “Many times the flexible and rock solid operation of consoles like Qu are the key to keeping festivals running smoothly.”