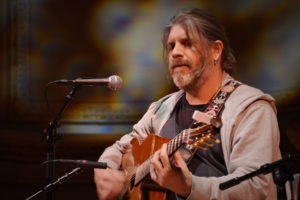 “The Django Experiment III focuses mainly on Django’s compositions, but we stretched more in the direction of what we are used to playing in the band—outside of that project—when performing my own compositions,” Wrembel tells us. “In some aspects it’s a more traditional Django album than I and II; in other ways it goes further into the NYC voodoo vibe. It starts with an Indian drone and ends with a crazy NYC Sixties jazz-crazy version of the waltz ‘Indifference.’ And in the middle there are a couple of ballads, some with a very American-sounding angle, some very Gypsy. The name of the project, The Django Experiment, really speaks for itself.”

“Twenty-five years ago, I spent many years with the gypsy masters, patiently learning their craft the traditional way,” Wrembel told us in January. “It’s been a long journey touring the world and experiencing the NYC jungle’s energy. I spent the last 15 years composing and touring, playing my own music.

“The Django Experiment is a re-exploration of my roots as a gypsy jazz guitarist [and] a tribute to Django Reinhardt, revisited with a new sound and years of integration of new musical informations…sort of Django meets NYC, meets the world. It is actually extremely traditional and extremely non-traditional at the same time. What’s important is the use of colors and sounds over his music that has not been done before.”

Wrembel, who is from France and lives in New Jersey, got a major boost from Woody Allen when the filmmaker used Wrembel’s song, “Bistro Fada,” in his 2011 comedy, Midnight in Paris. Wrembel was selected by composer/producer Hans Zimmer to perform at the 2012 Academy Awards. He has contributed music to two other Allen films, plus commercials and TV, and now he has a Clio Award (and a Grammy) under his belt.

Wrembel and his band will celebrate the release of The Django Experiment III with a performance at Joe’s Pub, 425 Lafayette St., New York, 7 p.m. January 23. Tickets are $25 (all ages). For more information, call 212-967-7555 or visit publictheater.org.

Warbringer: "We’re not walking on eggshells, as far as the riffs we write. We don't go, 'It’s gotta be thrash!'"