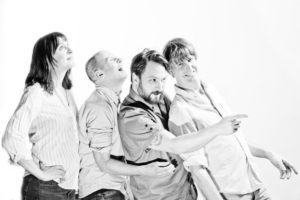 Stephen Malkmus & the Jicks have announced a new album, Sparkle Hard. The disc, the band’s seventh, will be released May 18 via Matador Records. The former Pavement leader also has premiered a new song, an old-school, four-chord stomper called “Shiggy,” which you can sample below. It follows the twangy “Middle America,” which saw the light of day last month.

Malkmus started writing Sparkle Hard three years ago. He’d upgraded his home-recording equipment and had been working on the Netflix series Flaked (he penned the incidental music and the theme song). Demos were done in one day in April 2017; in May, he and the Jicks—Mike Clark (keyboards), Joanna Bolme (bass) and Jake Morris (drums)—started recording at a new studio in Portland called Halfling, which is managed by Chris Funk of the Decemberists, who also produced the album.

Self-indulgent escapism has never been the Jicks’ bag, but on Sparkle Hard, the reality of modern life sits closer to the surface—whether it’s a proto-punk grind or a back-porch country duet doing the talking. It’s a cleaner burn for complex times.

If 2014’s Wig Out at Jag Bags balanced the lengthy prog workouts of Pig Lib with Mirror Traffic’s sparky pop moments, then Sparkle Hard bears less obvious direct relation to what’s come before. It also has turbocharged energy and enthusiasm by the truckload.