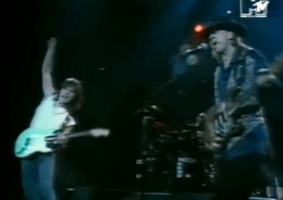 Stevie Ray Vaughan and Jeff Beck Perform "Going Down" in 1989

Back in the fall of 1989, Stevie Ray Vaughan and Jeff Beck kicked off their one and only tour together.

The trek, dubbed “The Fire Meets the Fury,” kicked off October 25, 1989, in Minneapolis and wrapped up December 3 in Oakland.

I was lucky enough to catch one particularly awesome show during that tour — November 11, 1989, at New York City’s Madison Square Garden. I’ll never forget it for three three reasons:

01. The drunk guy behind me threw up about an inch behind my left ear. My brother saw happen it but didn’t tell me. Probably a good move!

02. It was the last time I ever saw Vaughan in concert. He was gone by the following August.

03. It was the only time I’d seen Vaughan play “Going Down,” a catchy Moloch/Don Nix tune made famous-ish by Freddie King and recorded by Beck for his 1972 Jeff Beck Group album.

Below, you can check out a performance of “Going Down” from this tour — October 28 at the UIC Pavilion in Chicago. We like it for several reasons (Come on, it’s Vaughan and Beck on stage together!); mainly, however, we love that Beck turns it into a legit shootout, as he often did in the Eighties, never wanting to be outdone, even for laughs.