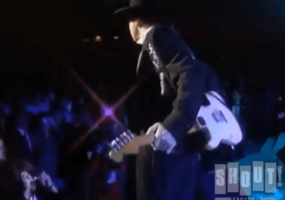 Below, check out a pro-shot clip of Stevie Ray Vaughan and Double Trouble — with Jimmie Vaughan — performing “Texas Flood” at a 1989 concert celebrating the inauguration of George H.W. Bush.

The performance is from a DVD from Shout! Factory, A Celebration of Blues and Soul: The 1989 Presidential Inaugural Concert, which will be released May 6.

Video of the show was considered lost for more 20 years before it was rediscovered 10 years ago.

As is often the case during this period of his brief career, Vaughan is in top form in this video. Dressed in a tux with a wide-brim hat, Vaughan “roars” the lyrics and digs into a blistering solo, parts of which he plays behind his back and at the edge of the stage.

“Texas Flood” is part of 25 minutes of Vaughan songs on the new DVD. You can see the complete track list—and pre-order the DVD—right here.