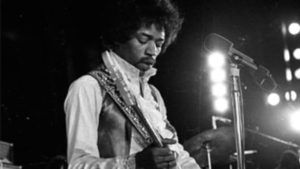 When Jimi Hendrix first exploded onto the scene, much attention was riveted on his radical reinvention of guitar-soloing vocabulary, technique and sound, inspired by a now-familiar roster of great blues soloists. But Hendrix had another musical asset that set him apart from similarly influenced British blues-rock contemporaries: years of experience as a professional R&B rhythm guitarist. Ballads like “Wind Cries Mary,” “Bold as Love” and, most famously, “Little Wing” displayed Jimi’s mastery of contemporary soul rhythm guitar styles and particularly the influence of Curtis Mayfield and Steve Cropper.

During the early Sixties, Mayfield’s lyrical guitar fills wove through recordings by his Chicago-based vocal trio, the Impressions, most notably the 1965 gospel-inspired classic “People Get Ready.” Cropper, meanwhile, anchored the Stax Records house band in Memphis and appeared on a string of hits by vocalists like Otis Redding, Eddie Floyd and Sam & Dave. Both players took a “less is more” approach, providing steady rhythms behind the vocals and succinct fills in between. Hendrix thoroughly absorbed their styles and techniques but flipped the approach on its head, treating his guitar as the lead voice and making fills the centerpiece of his arrangements.

Much of what Mayfield, Cropper and, in turn, Hendrix did can be boiled down to two related techniques: chord embellishment and pentatonic fills (including double-stops formed by playing two scale tones simultaneously). Embellishment involves fretting a chord while using a spare finger to adorn it with melodies, as demonstrated in FIGURE 1. Fret the G and A minor chord sixth-string root notes with either your index finger, or, as Jimi would, with your thumb. For C, use a partial voicing (note that Mayfield used an unusual open tuning based on the black keys of the piano—low to high, F# A# C# F# C# F#—so his actual fingerings were quite different). FIGURE 2 shows typical major and minor pentatonic scale–based fill patterns built around each respective chord type. FIGURE 3 is a Hendrix-style arrangement based on the techniques shown in FIGURES 1 and 2 over a progression that mixes chords from the C major and C natural minor harmonized scales (modal interchange). Vary the progression and the techniques to create your own versions of melodic rhythm. As Jimi demonstrated so brilliantly, the only limit is your imagination.