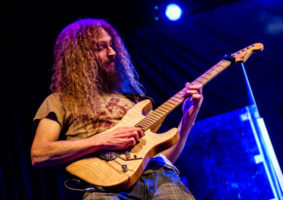 In this column, I’d like to show you the complex fretboard-tapping section from a song of mine called “Bad Asteroid.”

It’s from my self-titled album with the Aristocrats, which includes bassist Brian Beller and drummer Marco Minneman. “Bad Asteroid” is a song that’s been bubbling away in my collection of unused tunes for about 18 or 19 years, and this new album gave me a good excuse to finally record it properly.

It’s good material for this column because, in addition to requiring wacky and unusual tapping procedures, it features some nice harmonic interest in the chord progression over which the riff is played—what I like to describe as the “budget Steely Dan” chords. Without them, the riff just sounds weird. The chords are essential in providing a context to the tapped melodic idea.

FIGURE 1 illustrates the chord progression over which I play the tapped riff, which is essentially four bars long and followed by a fifth bar that resolves to Em9sus4. I begin in bar 1 with C/Bb, followed by A/B. Bar 2 consists of C9 to Fmaj7. Bar 3 sits on a chord that could be named a variety of things, but let’s call it Eadd2/G#, which is followed by a bar of Bbmaj7#11—that “Lydian mode” sound—and the resolution to Em9sus4.

All of the chords, with the exception of the last, are performed fingerstyle, wherein I either pluck all the strings at once or subtly pick out individual notes of the chords, such as moving from the bass note to the higher strings, or vice versa. I also like to apply a little whammy-bar vibrato whenever a chord sustains. Equally important is the feel, which is a slow-ish swing. As a result, what are written as 16th-note rhythmic subdivisions are played as eighth-note/16th-note triplets.

Now let’s look at the tapped figure, illustrated in FIGURE 2. Throughout this pattern, I alternate between fret-hand and pick-hand tapped notes. Except for a couple of spots, I constantly switch from one hand to the other. For tapping, I generally use the middle finger and pinkie of my pick hand; in this section, I hold the pick in the crook of my pick-hand index finger, so that finger is unavailable for tapping. The rhythm is also essential to this riff. I’m superimposing an eighth-note triplet rhythm on each beat, then splitting each eighth note into two 16ths.

This is the best way to look at the lick, because it progresses in two-note pairs, and representing it this way makes it easier to conceptualize. The other thing to keep in mind is that the two hands sort of mirror each other in their intervallic movement throughout. Slow practice will be mandatory to get a firm handle on this one. Although I wrote it, even I can’t play it unless I start from the beginning each time.

Check out the Aristocrats online at the-aristocrats-band.com. See you on the road!