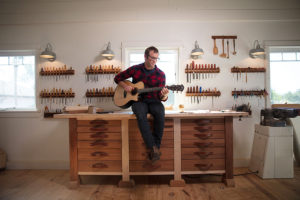 Taylor Guitars is threatening to re-write the acoustic guitar rulebook this year with the launch of its exclusive new V-Class bracing. And if a change in bracing doesn’t sound so exciting, it will do by the time you have read the extensive documentation and watched the videos Taylor has prepared for this launch. At a stroke, the Californian guitar maker claims, V-Class bracing not only greatly improves the tone and projection of an acoustic guitar but it also solves many of the intonation problems associated with tempered tuning and which result in an acoustic guitar never being quite perfectly in tune. With V-Class, Taylor claims, even novice guitarists can hear a significant improvement in intonation and tonal accuracy.

Taylor’s designer, Andy Powers, a keen surfer, says he came up with the idea for V-Class bracing while contemplating the behaviour of ocean waves and relating them to the way a guitar’s soundboard vibrates but he admits he was surprised by the profound effect the changes he has made to what are essentially strips of wood beneath the soundboard have on intonation too.

Taylor says guitars with V-Class bracing are easier to tune: the pitch sounds purer, more solid, so the tuner can locate the note more easily