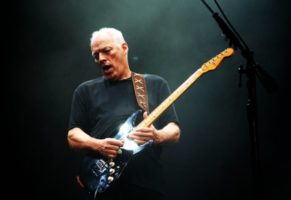 The Conclusion of My Wailing, David Gilmour-Style “Moonlight Sonata” Melody

I now present the final part of the melody from my two-guitar arrangement of the first movement of Ludwig van Beethoven’s famous piano piece, “Moonlight Sonata,” which I play in a wailing, Seventies British hard-rock lead style, inspired chiefly by David Gilmour, as well as Jimmy Page and Brian May.

As I mentioned last month, I call this arrangement “Shine On You Crazy Moon: A Study in Feeling and Control” because it features lots of polished string bends and vibratos that require a seasoned musical ear and refined touch to execute well and achieve the desired voice-like quality and pitch accuracy.

We pick up at bar 42, where the lead guitar melody re-enters after a 13-bar rest (see FIGURE 1). The first phrase here is identical to the piece’s opening theme that we learned last month, with the “mute, rake, bend-and-shake” stylistic decorations, but it then veers off into new musical territory in bar 46, as Beethoven further develops his melody with some cool new musical twists.

As we did last month, lightly rest your fret-hand index finger across the middle strings as you drag the pick across them in a downstroke sweep, to create a percussive, pitch-less grace-note rake into the first bend, which you’ll want to fret with your ring finger, supported by the middle finger one fret lower for added “push power.” Again, as you play through this first phrase and the rest of the figure, focus on precisely nailing each bend’s target pitch, be it a whole step, half step of one and one half steps, and, once the target pitch is firmly established, apply a wide, even finger vibrato, as indicated, repeatedly dipping about a quarter step below it and restoring it to full pitch to produce the desired rhythmic beating.

A good amount of distortion and sustain will help you develop a consistently wide and even vibrato technique, as you won’t be in such a hurry to “get your shakes in” before the note decays.

The final 10 bars feature some haunting, low half-step bends on the bottom two strings, all of which are performed by pulling the string inward, away from the edge of the fretboard, as Page does in his “Dazed and Confused” main riff, as opposed to the pushing technique we used for all the previous bends. There are no vibratos here, as the goal is to precisely nail the target pitch of each bend and hold it steady. Again, a generous amount of hall reverb will enrich the sound of this part and create a cool chorusing effect with each bend.