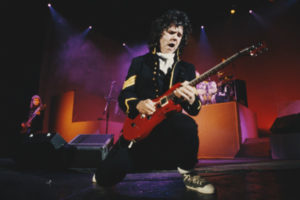 In this edition of In Deep, we’ll examine some of the signature elements of the brilliant blues-rock guitarist Gary Moore’s stunning, immediately identifiable guitar style.

In this edition of In Deep, we’ll examine some of the signature elements of the brilliant blues-rock guitarist Gary Moore’s stunning, immediately identifiable guitar style.

Born in 1952, in Belfast, Northern Ireland, Moore picked up the guitar at the age of eight, inspired by the music of Elvis Presley, the Shadows and the Beatles. But his strongest influences were John Mayall’s Bluesbreakers guitarists Eric Clapton and Peter Green, as well as legendary electric blues progenitors Albert King, B.B King and Albert Collins.

Another important influence was Jimi Hendrix; Moore would regularly include Hendrix’s slow blues “Red House” in his live shows. Though Moore was often seen playing a beautiful Fiesta Red 1961 Strat, his signature sound is more closely associated with the beloved 1959 Les Paul Standard that he played for many years.

He purchased that guitar from Peter Green in 1970 and, fittingly, used it to record his 1995 tribute to his mentor, Blues for Greeny.

Often, Moore would begin a song using the warm tone of his Les Paul’s neck pickup, with which he would perform melodic, vocal-like lines, then switch over to the bridge pickup for his solos to achieve a more aggressive and biting sound. Moore often employed a fair amount of gain—courtesy of Marshall heads (often JTM45s), 4×12 basketweave Marshall cabinets and Marshall Guv’nor and Ibanez Tube Screamer pedals—and was known for conjuring tremendous sustain, such as the celebrated “endless note” featured in his live performances of his classic song “Parisienne Walkways.”

A great way to approach incorporating Gary Moore–style licks into your playing is to start with the most essential scale for blues/rock soloing, the minor pentatonic.

FIGURE 1 shows the A minor pentatonic scale in fifth position.

The fingering I use for this scale is index-pinkie on the low E string, switching to index-ring finger for the rest of the scale. One of the unusual things about Moore’s style is that he preferred to use his middle finger in conjunction with his index for a great many of his licks, similar to the fretting approach of Gypsy jazz great Django Reinhardt. When playing this type of scale in this position, Moore would often use his index and ring fingers on the top two strings and the low E string but would switch to index-middle for all the other strings.

Occasionally, Moore would stick with the index-middle approach across virtually all of the strings, along the lines of FIGURE 2. In this lick, I start by barring the index finger across the top two strings at the fifth fret and use the middle finger to execute the quick half-step bends on the B string, as well as the fast hammer-ons and pull-offs across the B and G strings.

For many of these runs, Moore would rely on quick hammer-on/pull-off figures between pairs of notes on a given string, as demonstrated in FIGURES 4a and 4b.

In FIGURE 5a, I apply this concept to every string as I descend A minor pentatonic in a symmetrical fashion. FIGURE 5b offers a similar, albeit simpler, idea, and FIGURE 5c presents a similar approach applied to an ascending lick.

Further permutations on this concept are shown in FIGURES 6a–c. Once you’ve got a handle on these, try moving to other areas of the fretboard and apply the concepts to other keys, as demonstrated in FIGURES 7a and 7b.

FIGURE 8 offers an example of soloing in Gary’s style over a medium straight-eighths funk groove along the lines of his cover of Albert King’s “Oh, Pretty Woman.’

The title track of Moore’s hit album Still Got the Blues (a complete transcription of which appears in the May 2011 issue of Guitar World) featured a “cycle of fourths” chord progression more common to jazz than blues or rock.

FIGURE 9 is a melodic solo played over this type of progression in the key of Am. Notice that each phrase makes direct reference to the accompanying chord by targeting its third. Also, bar 6 features a fast pull-off lick to the open high E string, a technique Moore utilized in a great many of his solos.