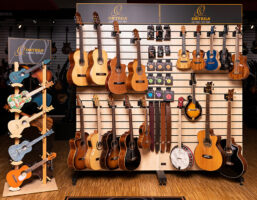 With restrictions looking to be lifted in full by the UK Government at the end of February, MIN catches up with show organisers Gold Media & Events ahead of the first large scale MI Show to take place in the UK after two years of COVID delays.

As the established The UK Drum Show returns this April at its new larger home at the ACC Liverpool, accompanied by the launch and debut of The UK Bass & Guitar Show in a neighbouring building taking place over the same weekend, MIN asks organiser Neil Golding about the forthcoming shows and the challenges of the past two years.

MIN – With your shows finally going ahead on the 2 & 3 April in Liverpool, did you think it would be two years before you could get back to running live events?

NG – After a very positive mood and feedback at the NAMM Show 2020, who would have guessed just weeks later the devastating effect it would have not only on shows, but the MI and our personal lives. I can recall saying to my wife “what now,” thinking how is any business going to be able to navigate through this, with the only thought the whole world is in this together, offering some comfort trying to look forward. Initially I guess, everyone was hoping for a period of weeks or months rather than years at the beginning. Praying lock downs alone would possibly solve the spread. Alas we all know how that turned out. So there have been points, highs and lows, after set backs and delays, but I don’t think anyone including us thought it would be 2 years.

MIN – What have been the biggest challenges over the past two years that you have had to overcome to get to where you are now with the shows on the horizon?

NG – That’s a good questions and the answer is, it has been varied over the past two years. Initially back in 2020 I have to say uncertainty was the biggest challenge. We were asked questions no one had answers for and equally businesses we spoke with in some cases, said, “what now” or “the world is never going to be the same again”. With the uncertainty it created fear of the unknown and panic on how to plan through something no one had experience of previously.

MIN – How did the trade react in the early stages of COVID back in 2020 as you were about to run the Bass Show just weeks before the government cancelled all live events and your dates had been announced for the Drum Show just 6 months later in September?

NG – The trade has been very supportive I must say throughout the past two years. As I guess it was a problem we all had to solve together. At the beginning not knowing the landscape of the things to come we had a few companies ask for refunds as they couldn’t see a way forward, but as time has gone on, we have had companies reach out and new relationships made too. It was very hard for everyone in the early months of 2020, but we had to have the attitude of keep calm and carry on.

MIN – During lock down you made the decision to move from Manchester Central to the larger venue the ACC Liverpool. How did the trade and your guests respond to this and why the move?

NG – Lock down put the brakes on for many and with time on our hands when everyone was told to stay at home, like any business owner, you have to take stock of what you are doing and plans for the future. On one hand we had launched a very successful drum and percussion exhibition in 2017 that had grown year on year, with 2019 being the busiest yet, and on the other hand we had set off to launch the bass guitar show which clashed with the first lockdown and was postponed.

We appreciated as a business we had a very established event with the drum show which had seen year on year growth, and on the other hand, we had another show in its infancy that we must nurture and grow in the same way any event naturally prospers over time with investment and support. The things we took for granted, holidays, visiting friends and family, eating out, socialising and entertainment were gone. However, we took the view that when the public were released from their captive working/home environment that we would see further love and appreciation of all things entertainment and that we had to prepare for that.

When we concluded the Drum Show in 2019, we were already close to exhibition capacity so we knew at some point we had to make the move to something larger. In complete honesty, we didn’t think the growth in this show would be as instant as its return, but we have added more than 20 new companies and counting whilst planning our return and passed our 2019 admission ticket sales a month ago. So the desire is there and many of our previous exhibitors have expanded booth sizes for their return too and the ACC Liverpool has enabled us to do that.

MIN – What do you put this down to?

NG – Musicians are social creatures by nature and entertainers too, so given the opportunity of cool gear, or artist appearances, its a good day or weekend away. Putting that aside, many have missed what they love doing. Our new health and safety Officier for our events this year is part of a team operating H&S for the Southampton Boat Show that ran recently. Whilst some of the big brands in boating chose to sit it out for 2022, the show was flooded by the public wanting a great day out amongst the community they love and there are parallels to draw here. Sure there are problems with shipping, parts, Brexit, COVID regs, stock etc, not making light of any of these challenges facing businesses, but as far as the public are concerned they want to do stuff in abundance, so we have to put aside the obstacles and challenges we face as organisers and put on a show!

MIN – What do you think the future of shows in general are?

NG – As an event organiser that could be considered a loaded question, and the cynics out there will challenge my response. But here goes.. A show is simply a coming together of likeminded folks chatting and experiencing their passion. It is a community and get together, a pint and a meal down the Dog & Duck after the show finishes in the evening. But, it enables everyone to come together in one place, display the latest innovations and get direct feedback from their customers and engage with new consumers and build their brand relationship with them. As organisers, we are simply a host passing a baton to exhibitors for them to share their products with our guests. It’s a partnership.

For some, shows will be an inconvenience: travel, expense, weather, cynicism about a location; London too expensive, always rains in The North and some companies probably had that outlook before COVID. But, the opportunity given by COVID with new interest and new players taking up an instrument for the first time or returning to one is the real exciting opportunity here and we hope that more companies wish to embrace this with us in Liverpool and help replenish some of the audience that has fallen away due to its challenges.

Consumer shows play such an important part in gaining responses and feedback from end users, which I feel is invaluable. Companies spend great sums on R&D, manufacturing, distribution, marketing, but speaking directly with customers is priceless and there are very few opportunities here in the UK to do this outside of a retail environment. The irony being that despite all the challenges faced, the growth we have seen in exhibitors has been with further international exhibitors, from Hong Kong to Florida, from Turkey to Turin.

MIN – Why do you think you are seeing an increase in International Exhibits?

NG – There are many reasons I feel. One is that some businesses see the UK leading the way with opening up, following its extensive vaccination programme. Other possible reasons are that there has been no NAMM or Messe for 2021, and a recent post I saw suggested that Messe had been postponed for 2022, of which we are waiting to see further news of and confirmation.

MIN – Of course both Messe and NAMM are both trade events but are you seeing a shift to brands wishing to be in front of consumers?

MIN – Is there any message you want to share with companies considering events?

NG – I would simply put it as this. No company has had the opportunity to engage with communities physically for 2 years. Whether it is our event or any other that enables you to do this, we have to return to our physical and people person industry at every opportunity. Whether its a small booth, a grand gesture a “W’ere Back” statement – don’t do nothing then complain about the state of the industry, would be my humble advice for what it’s worth. This is a great industry and music has been the resolve for many, including myself during this pandemic. Let’s get back to what we love.

For more information about the show, visit:

The post The UK Bass & Guitar Show and The UK Drum Show Count Down appeared first on Music Instrument News.