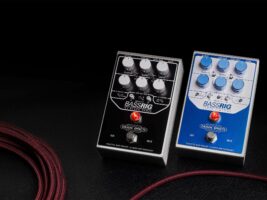 Origin Effects has launched the BassRIG Super Vintage and the BassRIG ‘64 Black Panel. Both are compact bass preamp pedals based on the sounds of classic vintage amplifiers, offering cabinet simulation and a versatile set of controls.

Both pedals are equipped with a quarter-inch amplifier output and an XLR DI output with cabinet simulation. The cabinet simulation can be set to remain active on the DI output when the preamp side of the pedal has been disabled. Both use Origin Effects’ own Analogue Amp Recreation tech for their preamp circuits, promising a tube-like response and warm, natural character to the overdrive.
BassRIG Super Vintage
The BassRIG Super Vintage is modelled on the sound of Ampeg’s SVT bass head, first introduced in 1969 and most often paired with a large, matching 8×10 cabinet.
Controls include knobs for drive, clean blend, output level, a three-band preamp EQ, and toggle switches to adjust the mid-range frequency, the high-end character of the cabinet simulation, and a low-cut for preamp. If you’re using the quarter-inch amplifier output, there’s a separate two-band EQ on the output stage to make sure the pedal won’t introduce unwanted frequencies to your amplifier’s own preamp.
There are also toggle switches to lift the ground on the XLR output, and to choose whether the cab sim remains on when the pedal is bypassed.
BassRIG ‘64 Black Panel
The BassRIG ‘64 Black Panel is based on vintage Fender Showman and Bassman amps, as well as their matching 2×15 cabinets.
It has a similar control layout to the BassRIG Super Vintage, with knobs for output level, clean blend and drive, alongside a three-band EQ. There’s the same two-band EQ for the amplifier output, alongside
Two additional toggle switches select between a tweed or a black panel voicing, as well as a bright or fat preamp mode.
Both pedals list for £399 / $489.
Both pedals list for £399 / $489. Find out more at origineffects.com.
The post Origin Effects releases two bass preamps, the BassRIG Super Vintage and BassRIG ‘64 Black Panel appeared first on Guitar.com | All Things Guitar.