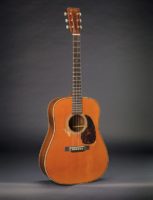 To Relic or Not to Relic? The Age-Old Debate Has Finally Reached the World of Acoustic Guitars

Reminiscing about his first real guitar, Doc Watson once said, “That old Gibson J-35 I played was as good a guitar as I’ve ever played. It truly was. It was a good old well-used guitar with scratches and scuff marks on it. It had some ‘prestige,’ in other words.”

Originally meaning “illusion,” prestige was once a tool from a magician’s bag of tricks, not a luthier’s workshop. But prestige can be used to describe the increasingly popular process of relicing. Also known as distressing or aging, relicing is the practice of making instruments look old—even if they’re brand new.

But if you ask guitar maker Wayne Henderson to build you a copy of a 1937 Martin D-45—a Holy Grail guitar—you’d better not ask him to relic it. “To make it nice and pretty and then start beating it up?” asks Henderson, the subject of Allen St. John’s 2006 book Clapton’s Guitar: Watching Wayne Henderson Build the Perfect Instrument. “Some of them look pretty good and some look pretty bad…I’d have to have someone else do it.”

Henderson gets to the bottom of a fiery debate in the acoustic guitar world: to relic or not to relic? Building the past into an instrument means you need to look at history first.

“This relicing business has been around for a while. People have been antiquing violins for hundreds of years,” says Henderson in his thick Southern drawl. “I heard a story that [Niccolò] Paganini played a Stradivarius violin and he brought it to [19th-century French luthier Jean-Baptiste] Vuillaume to have repair work done. Vuillaume said it would take two weeks and Paganini reluctantly agreed. When he came back, Vuillaume had made an absolute copy of it. Paganini didn’t know which was which—and he was a doggone expert.”

Fast forward to 1993 when Don Was, who was recording the Rolling Stones at the time, mused to Keith Richards, “If they can antique an armoire, why can’t you antique a guitar?” A year later, Richards presented Was with a “beat up” new bass that the Fender Custom Shop had built for him. Thus the Fender Relics series, made to look like they were played at a thousand gigs in the grungiest dive bars since the Fifties, was born.

This trend has only recently made it to acoustic guitars. Why the delay?

“In the electric world, the recipe is more about the body and the pickups and the signal chain. With acoustics, the guitar is the signal chain,” says Ben Maschal of Pre-War Guitars Co., a small North Carolina shop that builds new pre-distressed acoustics that harken back to the golden age of luthiery, the Thirties. “From the strings to the saddle to the bridge to the bridge plate to the braces—”

“And out the hole,” Wes Lambe, cofounder of the company, adds with a laugh.

“There’s something special when you pick up a Martin from pre-1940,” says Dick Boak, former director of the museum and archives at C.F. Martin & Company. “Everything was working, the craftsmanship all melded into something significant. We call it an ‘open door’ sound.”

Unfortunately, old guitars can be tricky. Hide glue that has dried up can lead to loose braces and warped tops; the pull of heavy strings over decades can leave the action unplayably high. So instead of dealing with a vintage guitar that comes with issues, some consumers have turned to buying factory-fresh instruments that are pre-distressed.

“It’s kind of a paradox,” says Boak, who retired from Martin earlier this year. “We’re capable of making a perfect, extremely refined instrument, and the challenge is to the people in production. People wouldn’t want to undo what they created.”

Jake Wildwood, a vintage-guitar repairman out of Vermont, has been breathing new life into old instruments for close to a decade and has noticed a long-running trend.

“People buy new instruments with faux wear-and-tear for the same reason Harmony used faux-flame paint jobs on budget instruments to make them look like figured maple instead of birch,” he says. “It’s purely an aesthetic choice—like a pre-ripped pair of jeans. Personally, I like to make fresh tears in my clothing from my own use, but not everyone feels that way. Product image is a huge driver of any market.”

To do it well, not surprisingly, takes time. Crucial to getting a vintage sound is starting with wood that has a similar cell structure to wood that has naturally aged. Many companies dry the wood using torrefaction, the centuries-old practice of heating up the wood in an oxygen-free environment that even the Vikings used.

“It sounds great and smells like maple syrup when you sand it,” Maschal says. “And it moves less with heat and humidity changes.”

Martin Guitar, although new to relicing, has been torrefying wood since 2015. “There’s a stability when you’ve expelled moisture from cells.

“There are some real benefits,” says Boak of Martin’s new line of Aged guitars.

After getting the wood conditioned, luthiers then can turn to the finer points of their craft. “It’s a pretty inefficient way compared to today’s standards. Partly from the use of hide glue and the use of hand construction in the custom shop with hand planes,” says Boak of the mature sound the instruments develop from the old-world building techniques. “The power startles you.”

Once the guitar sounds vintage, it’s time to face the challenge of making it look that way too. “It’s kind of an arduous process with dremels, dirt, keys, change and all kinds of things,” Boak says.

“Not breaking it and not making it look bad,” Maschal says of the primary goal when distressing a new instrument. “It took lots of trial and error.”

In their five-person workspace, Maschal and Lambe are able to keep the process dynamic.

“Being part of a team means we rely on each other. One guy starts and says, ‘you guys have to help me with this.’ We’re able to collaborate,” Maschal says.

So why, despite all the difficulty and controversy, do people keep chasing the prestige?

“Understand that people hear with their eyes,” Maschal says. “Say you have two guitars on stands: one new and the other beat-up. People are afraid to pick up a really shiny guitar. Being able to play without worrying about it…”

“The prestige makes it more inviting,” concludes Lambe. And that invitation is to hear Doc Watson ripping into “Black Mountain Rag” on his old Gibson J-35 with a little bit of extra magic.