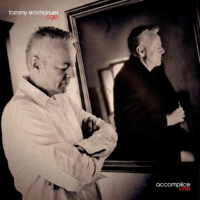 The album—which is set for a January 19 release via CGP Sounds/Thirty Tigers—features an impressive guest list that includes Jason Isbell, Mark Knopfler, Ricky Skaggs, Rodney Crowell, Jerry Douglas and Amanda Shires, to name but a few.

“It’s been such an honor to work with some of the greatest artists I know, and some of the most inspiring people in music today,” Emmanuel said in a press release. “I wanted to record an album of duets that could showcase my love of many styles, the challenge of rearranging some classic songs, and share the fun of total improvisation with players who do it on a level that we all marvel at!”

Of Emmanuel’s playing, mandolinist David Grisman—with whom Emmanuel announced, just last week, an entirely separate collaborative album—said “Tommy is a force of nature and of course, I wondered how I could keep up with him!”

Jason Isbell—who teamed up with Emmanuel for Accomplice One‘s opening track, “Deep River Blues”—added, “If you like guitar playing, it simply doesn’t get any better than Tommy.”

You can check out the full tracklist for Accomplice One below.

Best fuzz pedals 2020: a guitar effects essential for your pedalboard

11 alternate tunings every guitarist should know