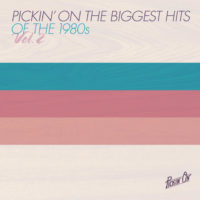 Los Angeles-based CMH Records will release a new album, Pickin’ on the Biggest Hits of the 1980s: Volume 2, on February 24.

The album, which represents the second time the “Pickin’ On” crew covered Eighties hits, features a brand-new bluegrass interpretation of Toto’s 1982 hit “Africa,” plus 11 more songs. You can check out our exclusive premiere of “Africa” below.

The collection was produced by Brad Davis, who is known in bluegrass circles for his “double down up” guitar technique, not to mention his songwriting, vocals and producing skills. He has worked with Willie Nelson, Earl Scruggs, Emmylou Harris, Marty Stuart, Dwight Yoakam, Merle Haggard, Johnny Cash and many more.

And speaking of big names, Toto’s Steve Lukather is a fan of Davis’ version of “Africa.”

“Of all the renditions of our song—and there are many—Brad Davis has taken it to a place I never expected in the coolest way,” Lukather says.

“I’m honored to be the producer of the CMH bluegrass tribute to the Eighties,” Davis adds. “I felt like these songs had such an impact on our generation that the only way to create a bluegrass arrangement was to use the original track as my pilot for the ‘grass version. I fell in love with these songs years ago, and I hope this tribute will cause everyone to fall in love again.”

Besides Davis, who sings and plays acoustic rhythm and lead guitars, banjo, mandolin and acoustic bass on the album, Pickin’ on the Biggest Hits of the 1980s: Volume 2 also features performances by vocalists Makenzie Rains and Lou Ann Price.

“Africa” will be available as an instant-grat track via iTunes starting Friday, February 10. Head here for more information.

Pickin’ on the Biggest Hits of the 1980s: Volume 2 Track Listing:

1. Africa (Toto)
2. I Wanna Dance with Somebody (Who Loves Me) (Whitney Houston)
3. Walking on Sunshine (Katrina & The Waves)
4. Faith (George Michael)
5. Our House (Madness)
6. The Power of Love (Huey Lewis & The News)
7. Dancing with Myself (Billy Idol)
8. Walk Like an Egyptian (The Bangles)
9. Simply Irresistible (Robert Palmer)
10. Danger Zone (Kenny Loggins)
11. I Want to Know What Love Is (Foreigner)
12. Time After Time (Cyndi Lauper)

Reverb.com reveals the top-selling guitars on its platform in the last 90 days

Joan Armatrading: "When Mark Knopfler wrote Money For Nothing, he knew it was a hit. As the creator, if you don’t know, you need...