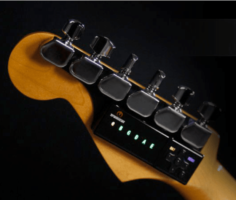 Tronical—the German company most well-known for its “robo-tuning” devices—has announced that it is suing Gibson for $50 million.

In a press release, Tronical identified itself as “The world’s leading company for the development and production of patented Auto Tuning Systems for guitars, which Gibson Brands (Gibson) markets under the name ‘G-Force.'” The company also stated that the lawsuit had been pending before Hamburg State Court since December 2017.

In a statement given to Music Radar, Tronical founder Chris Adams said “Tronical is claiming licensing fees to the amount of 23 million US dollars from the share in the profits agreed in the contract, and a further 27 million US dollars on the grounds of Gibson’s breach of contract of the exclusive research and development agreement with Tronical, which Gibson should have met by 2026.”

Tronical’s robo-tuning technology has been marketed by Gibson as Gibson G Force, and was introduced as a standard feature on the company’s 2015 range of guitars. Following mixed reactions from players though, the company limited the technology to the company’s High Performance models in 2016 and 2017, before almost completely withdrawing it from the company’s 2018 line.