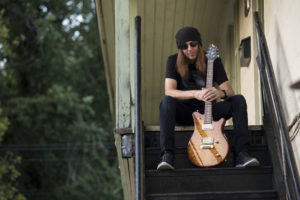 Today, GuitarWorld.com presents the exclusive premiere of “Johnny Guitar,” a new song and music video from King’s X guitarist Ty Tabor. The track is from Tabor’s new solo album, Alien Beans, which will be released January 12 via Rat Pak Records.

“’Johnny Guitar’ just kind of came to me,” Tabor says. “I originally was just writing fiction, just a story based on real things. Then, as I was writing, it just became real things—it became me. It’s definitely a song that all musicians trying to make it can identify with. You have to be able to deal with rejection to be able to have a chance of making it as an artist. There’s not a choice for me; I have to do this. I’d go crazy if I didn’t do this.”

Alien Beans is a double album featuring 10 new studio tracks (including “Johnny Guitar”) and a best-of disc with 11 re-mixed/re-mastered tracks—selected by Tabor—from his previous releases. You can see a full track list below.

“I wanted to do a rock album and put some new, heavier stuff together,” he says. “Along the way, we decided to remix some of the older stuff and make it a double album. Everything just fits together like it should.

“When it comes to what I write for solo material, I don’t really think about bands or anything like that,” Tabor adds. “I just write music that makes me happy, and I’ve ended up with an album I really love.”

For more of Tabor’s thoughts on the new album, be sure to watch the official trailer below (bottom video).

Alien Beans is available for pre-order right here. For more about Tabor, visit tytabor.com and check out the upcoming March 2018 issue of Guitar World.

Disc 11. Alien Beans2. Freight Train3. Johnny Guitar4. So Here’s to You5. Back It Down6. Somebody Lied7. This Time8. Heavily Twisted9. Until This Day Is Done10. Deeper Place

Disc 21. ‘Cause We Believed (Blame It)2. Free Yourself3. Ride4. Senseless Paranoia5. Money Mouth6. Fast Asleep7. Politician’s Creed8. Play9. Bring It on Back10. Nobody Wins When Nobody Plays11. Change