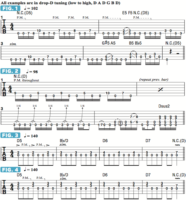 For decades, a common practice in rock and metal has been to use drop-D tuning, wherein the guitar’s low E string is tuned down one whole step to D, one octave below the fourth string.

Aside from the additional heaviness this tuning provides by extending the instrument’s range downward, having the bottom two strings tuned a fifth apart—D to A—enables one to play a root-fifth power chord simply by strumming the two strings open or barring a finger across them at any given fret. And with the fourth string included, a three-note, root-fifth-octave power chord can be sounded just as easily.

My favorite way to use drop-D tuning is to combine one-finger power chords with single-note riffs that utilize the open low D note as a pedal tone. To do this, I will play on the sixth string as if it were tuned normally, to E, but move all notes on the other strings two frets lower than where I would ordinarily play them. This results in some unusual shapes when moving between the sixth and fifth strings.

For example, in FIGURE 1, I begin with two open low D notes followed by a two-note ascending pattern on the sixth string. I then alternate between single notes on the fifth string and fretted and unfretted accents on the sixth string, resulting in shifting three-note melodic shapes.

If the sixth string were tuned normally, some of these shapes would be much more difficult to fret, so the drop-D tuning, in additional to sounding really cool, facilitates the execution of this melodic pattern. In bars 2 and 4, I use my fret-hand index finger to sound two-note power chords, E5-to-F5 and G#5-to-A5, that fall on beat two of each bar, respectively.

FIGURE 2 offers another example of alternating three-note melodic shapes, again using the open sixth string as a low D pedal tone. I begin on the major third of D, F#, which alternates against a D root note on the fifth string, but in bar 3 I switch to the minor third, F, which is repeatedly bent up a quarter step and pulled off to the open low D string.

The last bar of the pattern moves to four-note rhythmic shapes and incorporates a sliding octave shape fretted on the fifth and third strings. The figure ends with a “spread voicing” of Dsus2, with the index, middle finger and pinkie fretting the fifth, fourth and third strings, respectively.

FIGURES 3–5 illustrate three approach- es to what is basically the same riff. FIGURE 3 represents the two-note version, as only the fourth and third strings are used. In FIGURE 4, I expand the idea by adding a high D note on the B string’s third fret. In FIGURE 5, the open fourth-string D pedal tone is replaced with an open sixth-string D pedal, resulting in a much heavier-sounding riff.

Now that you have the idea, try inventing some of your own killer drop-D riffs using these and other techniques.