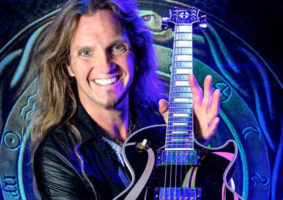 One of my favorite ways to spice up both my rhythm and lead work is to employ hybrid picking, a technique that has you using both the plectrum (flat pick) and your fingertips to pick different strings.

For the examples featured in this month’s column, we will be fingerpicking with all three available pick-hand fingers: the middle (m), ring (a) and pinkie (c). Along with the use of the plectrum, this gives us four different options for picking a given string.

A perfect way to get a handle on this approach is to play four-note groups, one note per string, with each string picked in an individual way. In our first two examples, phrases are played on the bottom four strings, with the plectrum used to sound all notes on the low E string with a downstroke, and the middle finger, ring finger and pinkie used to pick all notes on the A, D and G strings, respectively.

Let’s investigate some of the possibilities hybrid picking offers by moving through all seven chords of the harmonized G major scale, which is formed by playing a chord or arpeggio from each scale degree. In FIGURE 1, I play ascending and descending triplets for each chord, picking each different string in the manner described above. While playing through these chord shapes, lift each fretting finger off the string after you pick it, so that only one note sounds at a time.

We can expand on this concept by altering the triad shapes slightly and adding a melodic twist to each arpeggio. As shown in FIGURE 2, I begin with an Em(add9) arpeggio shape played across the bottom four strings and add two different hammer-pull moves on the G string, first moving between the minor third, G, and the fourth, A, and then between the minor third and the fifth, B. This approach is then applied to other add2-type arpeggios, moving down the neck across the same four strings.

FIGURE 3 demonstrates another effective application of hybrid picking, one that incorporates string skipping. Here I’m playing four-note arpeggios across the top four strings in a 16th-note rhythm and varying the top note of each arpeggio the second time I play it. I move up the neck through all the chords of the harmonized G major scale, maintaining the same picking and string skipping pattern for each new arpeggio. We can apply a similar approach to a descending arpeggio pattern, while switching to a sextuplet rhythm, as shown in FIGURE 4.

FIGURE 5 brings a double pull-off into play, for a nice legato touch. In this example, I play only G, C and D arpeggios, beginning each beat with three notes sounded on the high E string, the first of which is picked and the next two pulled off. This pattern demonstrates an effective way to combine hybrid picking with other techniques to facilitate the performance of more complex melodic patterns and ideas.