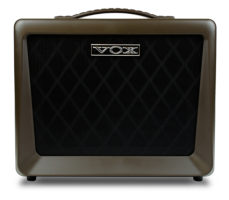 Vox Amplification has elaborated on the practice guitar amp series, the VX, by creating the VX50; a three-model lineup of compact, lightweight, high output amps for acoustic guitar, bass and for the first time in Vox history, keyboard. Delivering over 50W of power and equipped with the same high-performance tube found in the MV50 series, Nutube, each amp provides stunning sound quality and the rich overtones Vox amps are known for.

The VX50 acoustic guitar amplifier comes equipped with an eight-inch speaker, designed to deliver high frequency sounds and subtle expressions that are vital to capture the acoustic guitar’s tone. For inputs, this amp provides both instrument and mic inputs, the former with a full complement of EQ controls, the latter with phantom power.

Unique to the VX50 line is the addition of a Nutube-powered compact vacuum tube bass amp; the VX50 BA. Its distinctive features include an original eight-inch speaker, a unique bass reflex structure and a warm vacuum tube sound. Built with a four band EQ, the VX50 BA contains a compressor effect that’s indispensable for bass, and an overdrive effect that provides everything from subtle grit to high gain overdrive.

Lastly, the most unique amp featured in the new VX50 line is the VX50 KB, a portable keyboard amplifier. Outfitted with a three-channel design that meets a wide variety of performance scenarios, the VX50 KB provides three quarter-inch inputs, the last of which can be switched between a line or mic source. In addition to acting as an amplifier, the VX50 KB can also be used as a portable PA system or an on-stage monitor amp.

Vox has been known for their iconic hand-wired amps and innovative guitars for 60 years. But before they were creating revolutionary amps, Vox was an organ manufacturer, known as the Jennings Organ Company.

It was with this expertise tied with their progressive vision that Vox was able to create the iconic transistor-based combo organ, the Vox Continental. Today, 50 years later, VOX has created a new version of “The Connie;” transforming the original combo organ into a modernized rendition, loaded with present-day sounds and updated performance features.

With an all new intuitive interface designed for on-stage playability, the reissued Vox Continental allows for instant access to all features from the convenience of the front panel. At the heart of the interface is a unique multi-ribbon LED touch strip which allows for adjustment of a variety of parameters such as drawbars, EG, LFO, EQ and more.

The Vox Continental takes after Korg’s powerful Kronos and Grandstage models by housing multiple engines, each dedicated to providing amazingly articulate and detailed sounds. The organ section consists of three engines: Vox Transistor, Compact and CX-3, each meticulously mirroring the sound of the original models.

The EP-1 engine focuses on electric pianos, SGX-2 provides incredibly expressive pianos, AL-1 delivers polyphonic and solo synth sounds both modern and classic, and HD-1 rounds out the palate with a generous helping of PCM-based instruments across multiple categories.

The sounds are organized into four parts, each with a dedicated section and settings on the control panel. Organ, Electric Piano, Piano and Key/Layer sections can be combined to create powerful layers. A dedicated valve drive circuit utilizing Korg’s proprietary Nutube technology provides just the right amount of warmth, harmonic distortion and vintage character on the overall output.

Each Vox Continental comes with a custom, sturdy A-frame stand (STCONTINENTAL) and a road-ready V861 volume/expression pedal. The stand is fully height-adjustable and features an angle-adjustable tier.

For more info on both products, visit voxamps.com.